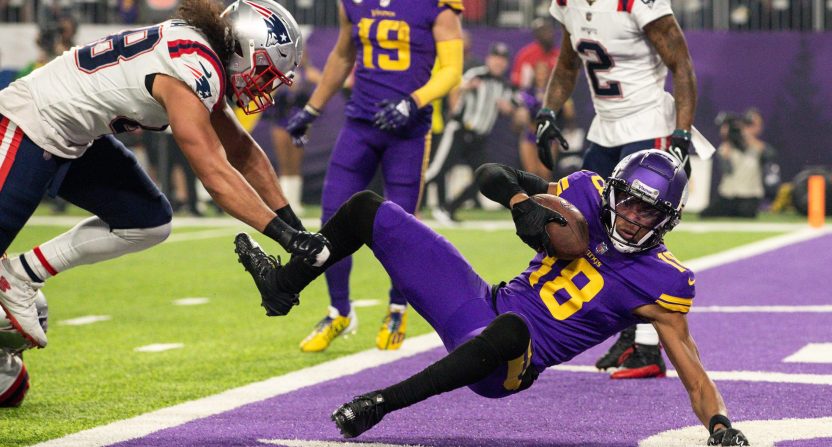 Justin Jefferson is a superstar. Anyone who has seen him play since the Minnesota Vikings drafted him in 2020 — or even at LSU before — would attest to that. But Jefferson isn’t just about highlight-reel plays. He’s perfectly capable of making them, but the third-year receiver isn’t a one-trick pony. Jefferson’s brilliance is consistent. That allows him to put up unprecedented stats for a player at this point of his career.

In the second quarter of Thursday’s game against the New England Patriots, Jefferson hauled in a 37-yard pass from Kirk Cousins. On its own, the catch was spectacular.

Justin Jefferson hauls in this Kirk Cousins pass for not only 37 yards but also NFL history.pic.twitter.com/pkLMQyOlqJ

That catch gave Jefferson 4,163 career receiving yards. That’s the most that any receiver in the history of the NFL has had over his first three seasons. The record was previously held by another Vikings great — Randy Moss — who had 4,163 yards from 1998-2000.

With that 37-yard reception, WR @JJettas2 (4,186) set a new NFL record for most receiving yards through a players first three seasons. He passes the previous record of 4,163 yards set by Randy Moss. pic.twitter.com/jg3aLGx0Fy

When the news of his record-setting performance came down, Jefferson was lauded for making history and for being a virtually unstoppable player, in general.

Justin Jefferson is the best in the business

No answers for Justin Jefferson at the moment. Special player.

"Bill Belichick ALWAYS takes away your No.1 option."

The fact that Belichick can’t even scheme Justin Jefferson, proves how special he is.

Justin Jefferson is amazing and cool and has dragged his unvaccinated steak-boiling QB adjacent to the realm of cool. best WR in the league

Justin Jefferson is so awesome to watch

Even when he’s crushing the team you root for

Jefferson finished the first half of Thursday night’s game against the Patriots with six receptions for 94 yards and a touchdown.