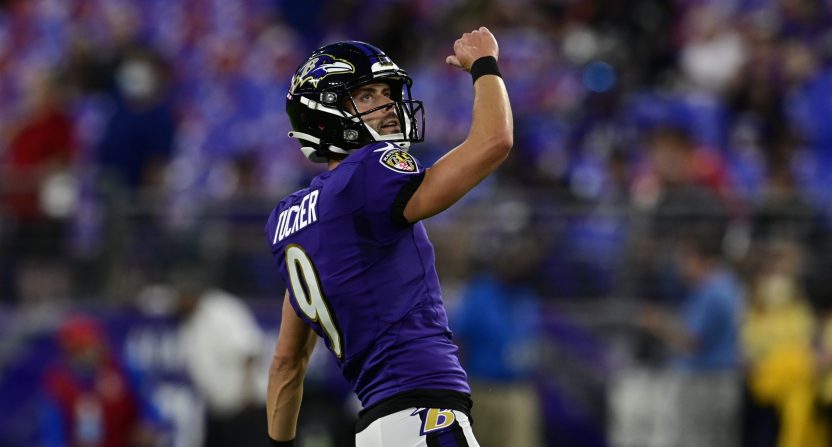 Baltimore Ravens kicker Justin Tucker came into Sunday with a career-best 61-yard field goal to his name. He not only bested that number but he also bested every NFL kicker who has come before him. Tucker booted a 66-yard field goal as time expired to lift the Ravens over the Detroit Lions, 19-17.

DID THAT JUST HAPPEN?!?!

The kick was literally just barely long enough as it doinked off the crossbar and then carried over for the win and the record. The kick tops the previous NFL record of 64 yards by Matt Prater.

It was an especially cruel day for Prater. Not only did he lose his record so quickly, but he also tried to break the record himself earlier today but ended up coming up short in a play that ended up being returned for a 109-yard touchdown by his opponent.

As far as Tucker goes, it doesn’t come as too much surprise that he ended up breaking the record. Tucker’s leg was never the issue. It was just a matter of right place, right time, and right stadium.

It’s a harsh turn for Lions fans who, of course, are on the receiving end of this crushing loss. It was an especially rough turn when the ball hit the crossbar, giving them a momentary sense of hope, only to watch that hope melt away almost immediately.

Priceless reaction through the goalpost on Justin Tucker’s 66-yarder.

A Lions fan and a Ravens on either side of the aisle, experiencing their polar emotions pic.twitter.com/xM8A0rP59G

Also, it’s not like this is the first time Tucker has crushed the hearts of Lions fans. Hey, when you’re good at something, you might as well keep doing it. And if Justin is good at anything, it’s making clutch field goals.

Justin Tucker is not only the most accurate kicker in NFL history. But he’s the most clutch.

Tucker improved to 16-for-16 in his NFL career on field goals in the final minute of regulation.