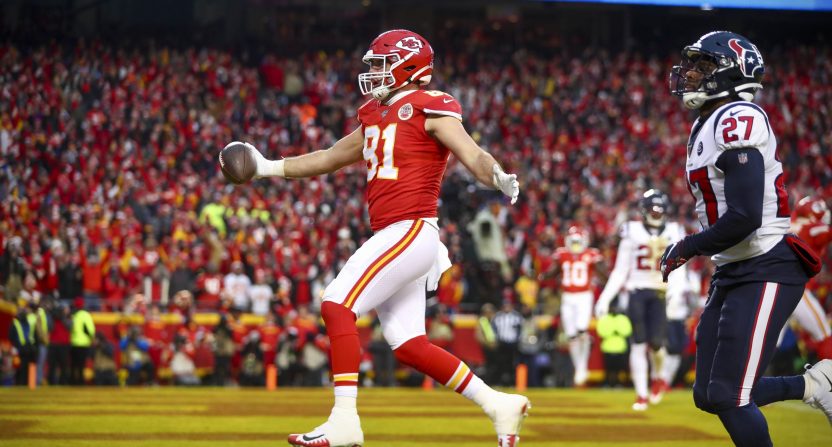 And when the Houston Texans went up 24-0 following a confusing array of errors and bad plays by Kansas City, it almost felt pre-ordained. That is until Bill O’Brien took his foot off the gas and Patrick Mahomes remembered who he is. That’s when the Chiefs rattled off four touchdowns in the second quarter to take a 28-24 lead into halftime and they never looked back, scoring 41 unanswered points and eventually cruising to a 51-31 victory in the AFC Divisional Round game.

The Chiefs now advance to host the Tennessee Titans in the AFC Championship next weekend for the right to play in the Super Bowl.

There are quite a few things people will be talking about from this game for a long time. Chief among them (no pun intended) were two critical errors that Bill O’Brien made. First, up 21-0, he decided to pull up on the 13-yard-line and kick a field goal rather than stomp on the Chiefs early in the second quarter. The move, while certainly the safe bet, ended up being the catalyst that helped turn momentum. That momentum swung for good when, on their ensuing drive, the Texans faked a punt on fourth down in their own territory. They failed and the Chiefs scored easily. Both decisions will haunt O’Brien and the Texans for a long time.

MAHOMES TO KELCE TOUCHDOWN! WE’VE GOT A BALLGAME! pic.twitter.com/XJoFPb8jnc

After that, it became the Patrick Mahomes and Travis Kelce Show. The duo connected three times for touchdowns in the second quarter as the Chiefs reasserted their dominance in the game and completed their historic comeback before we’d even gotten out of the first half.

Kelce finished with 10 receptions for 134 yards and three touchdowns. Meanwhile, Mahomes tacked on two more scores to finish the day with five touchdowns and 321 yards on 23-of-35 passing.

Patrick Mahomes becomes the youngest QB in NFL history with 300+ pass yards, 5 TDs, and 0 INTs in a playoff game.

Deshaun Watson also had a strong showing for the Texans (31-of-52, 388 yards, two touchdowns) but it simply wasn’t enough to keep pace.

The @Chiefs are making it look easy at this point, 41 UNANSWERED! pic.twitter.com/6wWI3wJEDS

Early in the game, it was hard to imagine there would be a point where one of the Chiefs players would do a Stone Cold salute with two beers following a touchdown, and yet, here we were. At that point, it was just a matter of time.

Nothing like giving yourself an in-game victory shower pic.twitter.com/qn35hCPDT8

In fact, the Chiefs ended up scoring so much, the stadium ran out of celebratory fireworks.

The #Chiefs literally ran out of fireworks because they scored too much!! pic.twitter.com/boBomUjVq5

The Texans head to the offseason asking themselves a lot of questions about O’Brien and what could have been. Meanwhile, the Chiefs will look to go back to the Super Bowl for the first time since 1969.