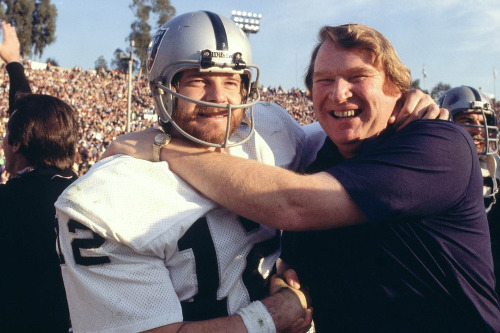 The wait is over for Ken Stabler… but he’s not going to be able to stand before the world in Canton, Ohio, this summer.

Stabler, the quarterback of the great Oakland Raider teams of the 1970s, was voted into the Pro Football Hall of Fame Saturday night, becoming one of two players to get in via the Senior Committee. Players whose careers ended more than 25 years ago can enter the Hall through such a path. Stabler joins Detroit Lions and Washington Redskins guard Dick Stanfel, who played in the 1950s, as a Senior-elected member of this august body. Unfortunately for fans of the Raiders and pro football, Stabler won’t be able to stand next to a bust or wear the yellow blazer which commemorate a player’s entrance into the Pro Football Hall of Fame.

It is always an emotionally complicated reality: A great athlete receives his sport’s highest individual honor, but not until after his death.

Sometimes, this kind of event is both sad and outrageous — the posthumous bestowal of a great prize is unavoidably lamentable, but in some instances, the athlete in question never should have had to wait such a long time to receive a due place in history. Other times, there’s no outrage; the reality is merely sad. Not every athlete can be voted and inducted into his Hall of Fame before his life ends.

Such is the case with The Snake.

Ken Stabler very probably deserves induction into the Pro Football Hall of Fame. Stabler was productive for roughly a full decade, which you can see when viewing his career profile. He made his name with the Raiders, but he turned in some good work with the Houston Oilers and New Orleans Saints in his late 30s. He led the Oilers to the playoffs in 1980. A few years later in the Big Easy, he went 7-7 in 14 starts with the Saints in 1983, a rather remarkable feat in light of the misery the New Orleans franchise had known at the time.

Stabler, at his very best, was majestic. His 1976 season — when he guided the Silver and Black to their first Super Bowl title — was a soaring masterpiece. In multiple seasons before that crowning year, Stabler also performed at an extremely high level. Keep in mind that the prime years of Stabler’s career unfolded before the late 1970s, when the NFL’s rules became a lot more friendly to offenses in general and the passing game in particular. An appraisal of Stabler’s stat line has to account for that reality.

In the same breath, however, was this career so impressive that Stabler should have entered the Hall well before now? Arguments can be heard on both sides, but there is — at the very least — a reasonable case that Stabler’s election into Canton should not have occurred very quickly.

Even when allowing for the lack of a pass-friendly climate in the NFL of the mid-1970s, Stabler loaded up the stat sheet with more interceptions than touchdowns. His peak years consisted of his time in Oakland, which spanned seven years as the season-long starter for the franchise. He did play into his late 30s, but his first full season as the Raiders’ starter came at age 28, due to waiting his turn behind Daryle Lamonica. In his mid-30s, Stabler wasn’t as dynamic.

Stabler ultimately exists a cut below the other top quarterbacks of the 1970s: Terry Bradshaw of the Pittsburgh Steelers, Roger Staubach of the Dallas Cowboys, and Fran Tarkenton of the Minnesota Vikings. It is enough that Stabler now joins them in Canton, along with another 1970s signal caller, Bob Griese of the Miami Dolphins.

The idea that Stabler should have been voted into the Hall with the same level of speed? It’s a reasonable one, but it’s not the kind of argument which should meet with zero resistance. It’s sad that Stabler didn’t get to see this day, but it’s not a miscarriage of justice.

Football fans should be thankful that The Snake — who suffered from CTE, as we wrote about earlier this week — will rest not just in memories, but in Canton.

Oh, what rich memories Stabler created, though. Three of the most famous plays in NFL history — even now — came from Stabler’s hands.

Enjoy those plays in the embedded videos below, just as you enjoy the realization that the 1970s’ fraternity of Hall of Fame quarterbacks is now complete:

THE SEA OF HANDS

Rest in peace, Ken Stabler — now in the Pro Football Hall of Fame.