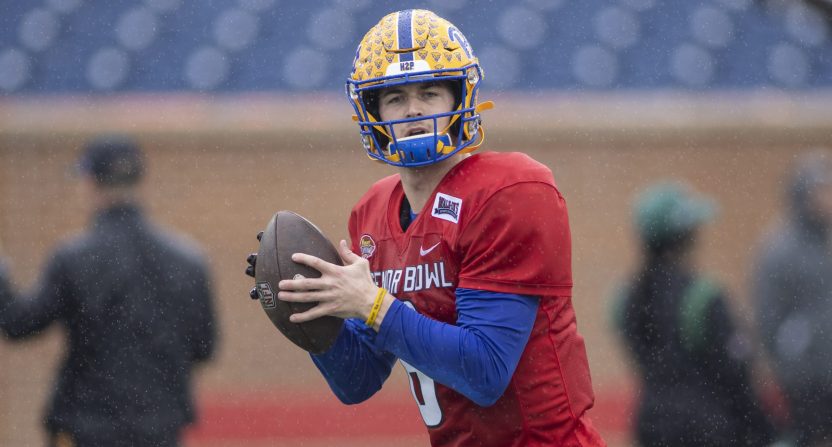 It’s NFL Draft season and that can mean only one thing. A lot of people around the NFL are going to make very big deals about very dumb things regarding potential draft picks.

This year’s contestant on the Wheel of Dumb appears to be Pittsburgh QB Kenny Pickett, whose hand size has been a matter of consternation for some time. When the Pitt signal-caller opted out of having his hands measured at the Senior Bowl, it led to a lot of speculation about why and whether or not that was going to be an issue as he got closer to the draft.

The answer is most definitely yes, at least in terms of how much of a discussion point it’s going to be. Pickett had his hands measured on Thursday at the NFL Combine and it warranted its own Adam Schefter tweet.

For reference, that would be a half-inch smaller than Joe Burrow’s, which met the 9-inch mark that is usually considered the “minimum” size for an NFL quarterback’s hands. So it is entirely possible that some NFL franchises will think twice about Pickett simply because of this. We’re not saying it’s right, we’re just telling you what NFL people do.

For what it’s worth, Pickett is happy to move on from the measurement.

“Whatever it measures, it measures,” Pickett said at his press conference. “I’m sure that won’t be the end of it, but that’ll be the last measurement I’m sure I’ll take of it.”

He’s right in that it won’t be the end of it. And judging by the reactions on social media, there are plenty of discussions to go around.

Not sure why everyone is freaking about Kenny Pickett's hand size. Lionel Messi's hands aren't even 8.5 and he's one of the greatest athletes the world has ever seen.

Kenny Pickett's 8.5 inch hands would be the smallest for a QB in the league.

Kenny Pickett’s hands are way too small for him to play in a cold weather NFL city like Pittsburgh.

No QB with a hand size smaller than 9” (combine measurements) has been drafted in the 1st round since at least 2003.

Consider yourself lucky that the entire internet isn’t spending the day discussing the size of your hands.