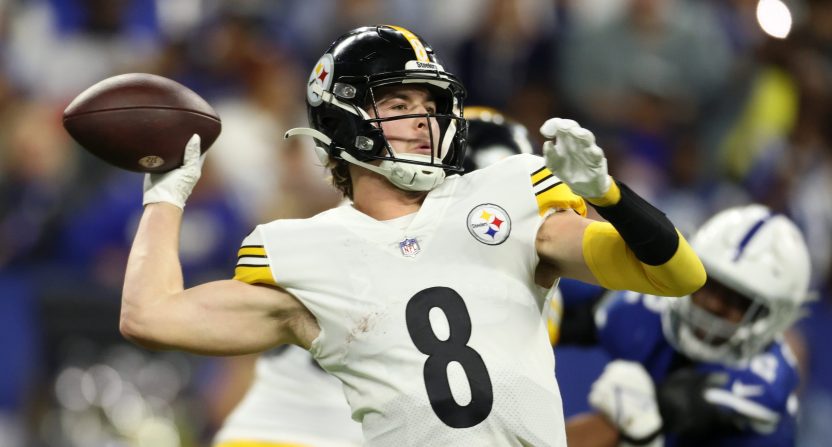 While the Pittsburgh Steelers defeated the Indianapolis Colts in their Week 12 game on Monday night, they still sit at 4-7 on the season. The playoffs are possible but remain a long shot. No matter how the postseason race goes, the season can be successful for Pittsburgh. That success will depend largely on the play of their rookie quarterback, Kenny Pickett. After Monday’s game, the Steelers and their fans have reason to be optimistic.

Pickett was he was 20-for-28 with 174 yards passing, with no touchdowns and no interceptions. On the ground, he added 32 yards on six carries. But while it wasn’t a dominant statistical game by any means, Pickett made some big throws.

One was a completion to Pat Freiermuth on third down, which came with the Steelers trailing in the fourth quarter. That gave the Steelers a first-and-goal.

Pittsburg would cash that in later, with Benny Snell Jr. scoring what ended up being the game-winning touchdown.

Pickett also helped give the Steelers a seven-point lead when he scrambled right and found fellow rookie, George Pickens, in the end zone for a two-point conversion.

Kenny Pickett to George Pickens for the 2-point conversion!

"We might be seeing this combination for a while."- Troy Aikman

Pickett’s performance on Monday, as well as his play in recent games, has been noticed by NFL observers. Several of those observers praised the rookie signal caller on Monday night.

3 straight games without a turnover from Kenny Pickett.

Kenny Pickett has now thrown 100 consecutive passes without an interception. Clearly getting much better.

Kenny Pickett @kennypickett10 putting the ball on the money-money tonight. Nice drive by the rook. In total control. #H2P

If you can’t see the progress Kenny Pickett is making week-by-week you’re just a hater at this point.

Kenny Pickett might be missing some receivers from time to time BUT, you can see development week to week…Smart decision making when it comes to scrambling

I am absolutely loving everything we’re seeing from Kenny Pickett tonight. He’s good and getting better.

Kenny Pickett’s numbers weren’t flashy but I thought he was solid tonight. This was the first complete game of “winning football” that he’s put together and on top of that, he led a 4th quarter game winning drive.

Step in the right direction which is all you can really ask for.

Pickett is far from a fully-developed quarterback. He still has some issues overthrowing his receivers and the Steelers were forced to settle for three field goals against the Colts. But while he’s not a perfect quarterback by any means, Pickett’s early numbers do justify being optimistic about his future.

The Steelers rookie QB is showing flashes of the Pittsburgh legend 👀 pic.twitter.com/KfrvwsKJLR

Pickett’s next chance to show his development off will be in Week 13 when the Steelers go on the road to take on the Atlanta Falcons.