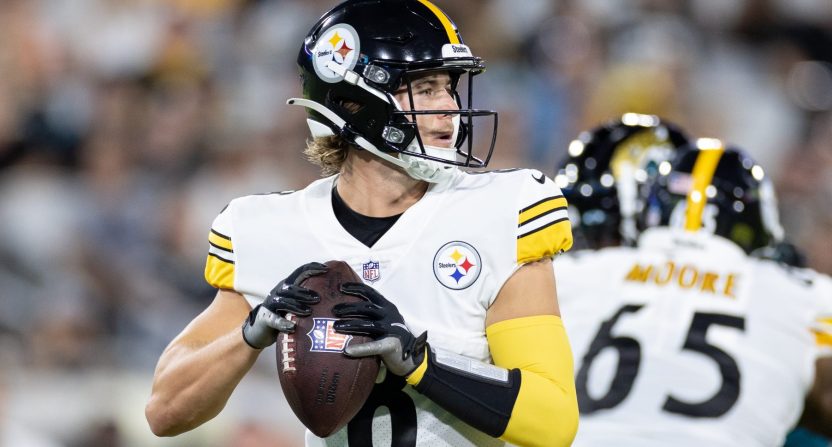 Veteran Mitchell Trubisky and rookie Kenny Pickett continue to battle for the Pittsburgh Steelers starting quarterback spot as head coach Mike Tomlin has not yet named a first-team quarterback. That means the competitors will have one last preseason matchup against the Detroit Lions to earn the role.

Even though Trubisky has been at the top of the depth chart throughout the preseason, Pickett, who was Pittsburgh’s first-round pick in the 2022 NFL Draft, is still making a push to start. And whatever happens, it sounds like he’s happy with his performance so far.

“I’m big on being the same guy every day,” Pickett said according to Ray Fittipaldo of the Pittsburgh Post-Gazette. “I’m big on being a pro — first guy in, last guy out type of stuff. I just want to be a professional and win. That’s all I want to show. We’ll let the chips fall where they may after the game, but I’m happy with what I’ve done so far.”

It’s likely that both quarterbacks will play extensively in Sunday’s preseason game against the Lions as Tomlin looks to find his starter. Whoever impresses him the most will probably be the team’s starting quarterback during the team’s season-opening showdown against the AFC North rival Cincinnati Bengals on Sept. 11.