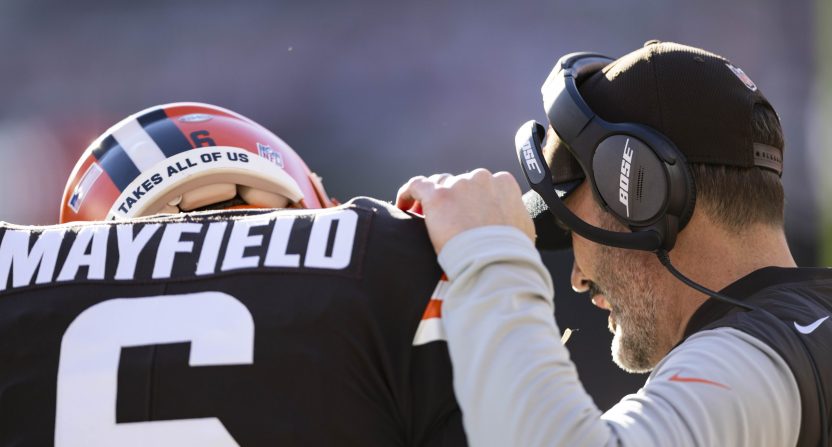 The Cleveland Browns came into the NFL season with some hype but they enter Week 18 having been eliminated from the playoffs. A big part of the reason things fell off this season was the lack of production from Baker Mayfield, whose relationship with head coach Kevin Stefanski over play-calling and decision-making appears to have been very strained as the year went on.

Cleveland.com beat reporter Mary Kay Cabot has covered the Browns and Mayfield extensively and she dropped a big story on Wednesday night. In it, she says that the relationship between the quarterback and the coach is strained to the point where something has to give. If not, the quarterback could end up requesting a trade this offseason, or the Browns could decide to move on from him.

Mayfield responded by calling the article “clickbait,” but it’s not as though these reports are new. Mayfield also has himself to blame for saying a few weeks ago that he and the Browns had “a lot of internal things” to sort out. Mayfield also complained that the Browns became “too conservative” after building a big lead against the Ravens a few ago in a game they barely won.

Stefanski was asked about his relationship with Mayfield, who is not playing this weekend in the season finale. His response was short and fairly unconvincing.

Stefanski: “My relationship with Baker is no different (than last year). Good relationship.”

“My relationship with Baker is no different (than last year),” said Stefanski. “Good relationship.”

Well, there you go. All is well with the Cleveland Browns.

Of course, no one believes that even if it’s true. And whether they win or lose this weekend, Browns fans are going to expect big changes in the offseason. They’re also going to want to see which direction the team moves in next season, whether that’s with Mayfield or without him. If the Browns end up drafting a quarterback or signing a notable free agent, the “relationship” between these two is going to be a very big topic of interest.