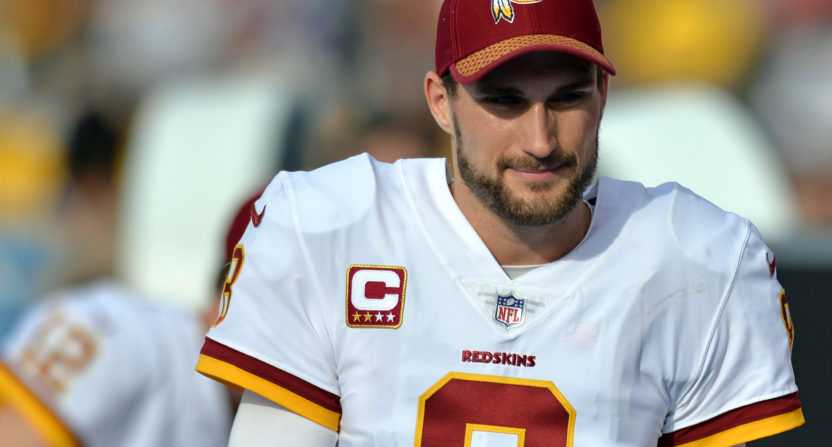 NFL free agency is just over a week away, but Kirk Cousins seems to be getting a head start on his decision-making.

On Tuesday afternoon, the Pro Bowl quarterback tweeted a photo of himself at age 18, the last time he was a free agent, then asked for suggestions of where he should sign.

Next week is now officially the first time since 2007 that I’ll be choosing where to play football. I’m open to suggestions. #freeagency pic.twitter.com/hnkbFkLLm2

As of this writing, Cousins’ tweet has generated more than 5,000 replies in an hour and a half, and some of them are quite colorful.

Former NFL lineman and ESPN analyst Damien Woody made a pitch for the Jets, who could certainly use a quarterback these days.

U know u want to! #Jets pic.twitter.com/FcXetDhg1Z

NFL Network personality Adam Rank suggested the Browns, which was met with exactly the reaction you would expect.

I thought we were on the same wavelength when I told you to go to Cleveland.

He’s still young no need to join a team that kills quarterbacks.

Meanwhile, Cousins’ mentions filled with Broncos fans and Vikings fans and all sorts of other fans earnestly arguing for their favorite teams, as if the quarterback would read and consider each reply.

Got some homies for you to toss the rock to pic.twitter.com/JPdCse7SAy

We have better ones pic.twitter.com/bJcxgeFZXp

You want a family? Come to Arizona. pic.twitter.com/DGHbi5MBFK

If you want to just have some fun, I'm sure New York and Denver would be good. On the other hand, if you want to become a legend, I'd suggest THE @buffalobills

But the most notable response to Cousins came from Broncos receiver Emmanuel Sanders, who pointed out that the Pro Bowler throwing to himself and Demaryius Thomas could be “dangerous,” then replied to several fans who questioned him.

The @kirkCousins8 to @DemaryiusT and myself ??‍♂️ combination would be dangerous!!!
What y’all think? ??or ?? https://t.co/7pNaDiea1W

Hahahaha it ain’t being debited outta your account… that’s the going rate for QB. https://t.co/ZPdX0JUVj4

I ain’t a salary cap expert and the numbers may not work but I know QB talent and he’s got it. I mean I have already played with two hall-of-fame QBs ?? https://t.co/YVLyjL2AYu

Is this, along with Von Miller’s plea for Cousins on ESPN’s First Take, a violation of the NFL’s notoriously strict tampering rules? Sure seems like it. But maybe the fine would be worth it for Sanders, Miller and the Broncos. Denver could seriously use a veteran quarterback, and Cousins is easily the best available. And given that reports have him leaning toward the Vikings while also considering the Jets, it already seems like time for a last-ditch Broncos appeal.

Anyway, Cousins will soon make his decision, one that will probably come down to money, location, likelihood of winning and all the other things that affect athletes’ free-agent choices. It will presumably not come down to suggestions on Twitter, but it was nice of him to solicit them anyway.