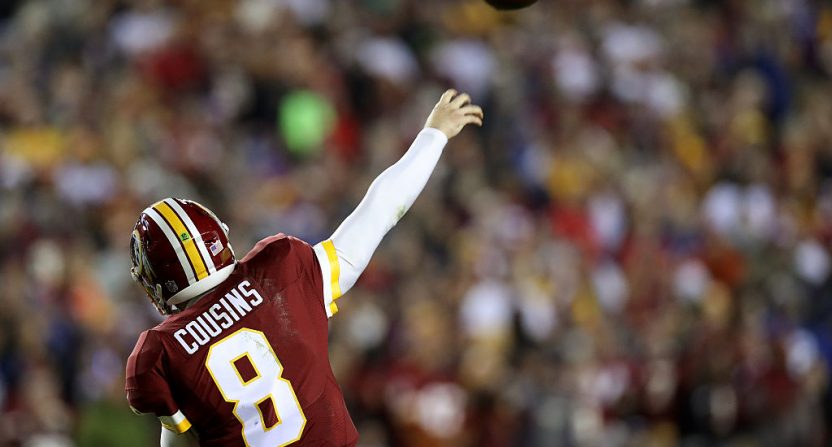 After being franchise tagged for a second straight year and requesting to be traded to no avail at a time when the front office has been operating without a general manager for an extended period of time, you can understand why Kirk Cousins may be a bit interested to know just what the plan is for the Washington Redskins.

Cousins took to Adam Schefter’s podcast to clear the air about his position with the franchise and attempt to put to rest any rumors suggesting he may be unhappy about his current situation.

“I did inquire if there was any interest in trading me to get an understanding of their perspective,” Cousins said on the ESPN-branded podcast. “The answer I got back was Mr. Snyder communicated his belief in me and desire for me to remain a Redskin.”

It was previously reported Cousins had asked about being traded, which ended up with no action taken (yet, at least) this offseason. To some, that seemed like there was some oil in the water within the franchise, but Cousins insists he is not looking to force his way out of Washington. Some took that to mean he was demanding a trade, but that does not appear to be the case, according to Cousins.

“Somehow it got twisted to where an employee of the store is using the word ‘demanded.’ That’s not the approach I took,” Cousins explained.

But Cousins is a professional and has been in the league long enough to understand the nature of the business. Because of that, Cousins realizes he needs to be keeping himself aware of all of the options and possibilities that he may or may not have control of as a player. Being under the franchise tag limits what Cousins can do for now, and Washington has continued to pay him more through the franchise tag than they were willing to offer on a contract. So far, that has worked to Cousins’ advantage, unless he feels he could get more on the open market.

For now, Cousins plans to begin training with his new wide receiver target, Terrelle Pryor. Pryor was signed by Washington to a one-year deal and fills the void left by Desean Jackson, who signed with the Tampa Bay Buccaneers.