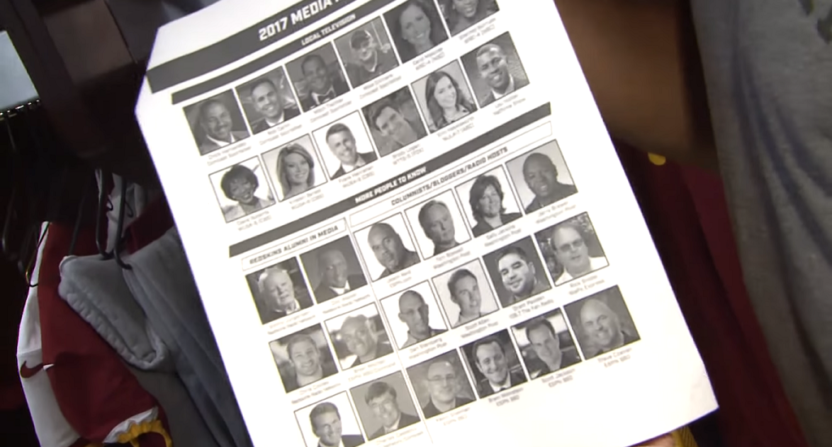 Washington quarterback Kirk Cousins prepares for press conferences exactly like you probably think he does; in a weird, robotic fashion. Cousins apparently keeps a printout of media headshots in his locker so he can study up and put names to faces, enabling him to address media members by name during pressers.

That’s according to this Washington Post story from Dan Steinberg:

“Wait is it really true that you love the soundtrack from the musical ‘Hamilton’?” I might ask.

“You know Dan, I always have loved show tunes,” Cousins will admit, because Kirk Cousins and I go all the way back and have built up mutual respect even when we might disagree and are definitely on a first-name basis. When you’re a regular reader of the D.C. Sports Bog and the print edition of The Washington Post, you know my name is Dan, and that’s why you call me Dan.

“You media people will be happy to see I’ve got your names and faces here on a printout,” Cousins told new WUSA sports anchor Darren Haynes during a tour of his locker, while showing him said printout. “So I can hopefully remember all your names as you guys change from year to year.”

As Steinberg notes, this is exactly what everyone should have come to expect from Cousins at this point:

Whatever your feelings on Cousins — Kirk, to me — I hope you will acknowledge that this is a perfectly on-brand move for him. He prepares incessantly. He organizes his days with color-coded charts. He has a Redskins Park nook to aid in his studying. And he keeps photos of Rick Snider and Thomas Boswell and Kevin Sheehan and Scott Allen in his locker, so that he can call all of us by our first names when appropriate.

Sure, I have no problem acknowledging it’s on-brand. A very weird, image-conscious brand. But hey, Cousins is currently in the middle of a nice run of exploiting Washington’s front office upheaval and poor decision-making, raking in the cash on multiple franchise tags after rightfully refusing a contract extension that would have only guaranteed him slightly more than the tags, while locking him in for longer, as ESPN’s Bill Barnwell pointed out this summer:

In other words, Cousins was already in line to make a minimum of $52.7 million over the next two seasons without sacrificing the leverage of going year-to-year on his contract. Allen and the organization wanted him to give up that leverage and leave nearly $40 million on the table for an additional $300,000. Even if you want to believe that Cousins should take a conservative approach in a league in which the attrition rate is perilously high, there’s no way to make that math credibly work. This wasn’t the sort of record-setting, no-brainer offer the organization is suggesting in Allen’s statement. It’s barely a credible one given Cousins’ current leverage.

Cousins is currently sitting 23rd in QBR through three weeks, but Washington is 2-1, and the NFC isn’t that good. He has a real chance to lead them to another playoff berth. And hey, if he wants to spend his time learning faces like he’s a first-year adjunct at a liberal arts college, why shouldn’t he? After all, NFL writers do tend to bend over backwards for players who show them just the slightest bit of reverence. It’s blatantly transparent pandering in this case, of course, but that likely doesn’t matter.

The fact the Steinberg column exists sort of proves the point, by both its very existence and when it comments on that fact explicitly:

And don’t you even dare suggest that Cousins should be spending that time studying his playbook instead, because dealing with the media is a real part of an NFL quarterback’s responsibilities, and Cousins does it brilliantly, and by maintaining a friendly relationship with the media you might also give rise to a media corps willing occasionally to give you the benefit of the doubt, and this sentence just consumed itself and is now wrapping its head fully around its tail.