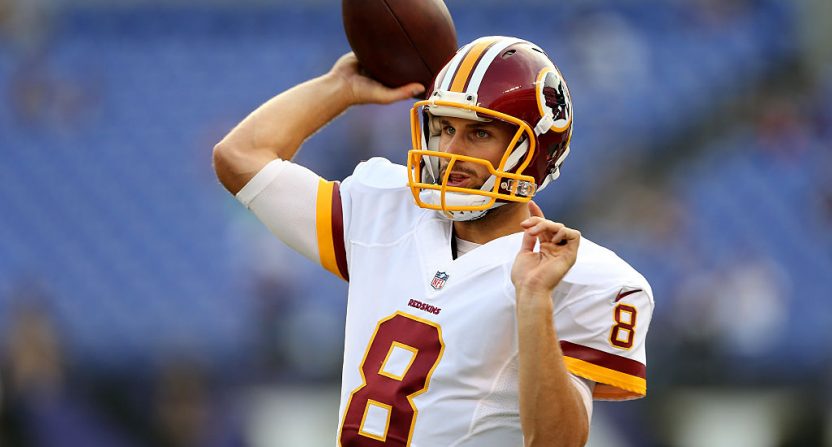 For all the hoopla surrounding Kirk Cousins and his franchise tag last offseason, it seems things are headed in that direction once again. Cousins had his extended audition for a multiyear deal in 2016, but now it looks that even if Washington is ready to give Cousins some long-term security, he might not be ready to take it, according to a report from Jason Reid.

For the past couple of years, former Redskins officials who know Cousins have said he really doesn't want to be in Ashburn. He wants tag.

It seems the franchise’s unwillingness to bet on Cousins last year, and continued hesitancy to embrace him as the future, has rubbed the signal caller the wrong way.

This Cousins thing is funny now. Redskins are gonna wind up paying a guy — whom they're not sold on — almost $44 million over 2 seasons.

@cookmich40 Again, I've been told he really doesn't want to be here. And at this point, it makes sense for everyone to move on.

Cousins is surely fine with a cool $44 million for two year’s work, but there is still something to be said for the long-term security he may pass up for a chance to go elsewhere next season. Although quarterbacks are more protected than ever, this is still football and a career-altering injury is forever one snap away. However, if Washington is still not convinced Cousins is their guy, then Cousins hitting the market via trade or free agency suddenly becomes a very interesting offseason plot line.

Cousins threw for nearly 5,000 yards last season with 25 touchdowns and a 97.2 passer rating. Even if Washington still has their doubts about him as the face of the franchise, another quarterback-starved team will surely leap at the chance to acquire a quarterback capable of putting up those kinds of numbers.

In the event Dallas elects to part ways with him, Tony Romo is the prize of the offseason, but Cousins would be a nice consolation prize for one of the losers of the Romo sweepstakes. And potentially could be someone more preferable as a long-term solution instead of Romo.

The Texans and Broncos both come to mind as teams that are functional enough everywhere else that having a legitimate starting quarterback could put them into contention. Bottom feeders like the Browns, Jaguars, and 49ers could all use Cousins, but it’s doubtful he and he alone c0uld put any one of them over the top.

However, each of the possible contender destinations have significant roadblocks. Houston just sunk a ton of money into Brock Osweiler last season, and they are surely gun shy about doing the same with Cousins shortly thereafter. Cousins wants big money if he is going to stay long term and following through with that could cripple the franchise financially when they attempt to address their other needs.

Furthermore, Denver has shown a willingness to stick to their “No-QB? No problem” mantra, and with the jury still out on Paxton Lynch, they might be up for holding off on bringing outside help for yet another season. There is no question that offense is loaded with talent, but just like in Houston, paying big bucks for a quarterback can result in shortcomings everywhere else.

If Cousins really is OK with betting on himself once again, there are worse places to line up behind center than Washington. The receiving corps is as talented as there is in the NFL, and if everyone can stay healthy, he should have little problem matching his 2016 output next year. The risk of injury is always lurking, but Cousins has two years of consistent, solid quarterback play under his belt. And if he can actually get Washington into the playoffs, then he may not have to worry about finding a new home in 2018 after all.