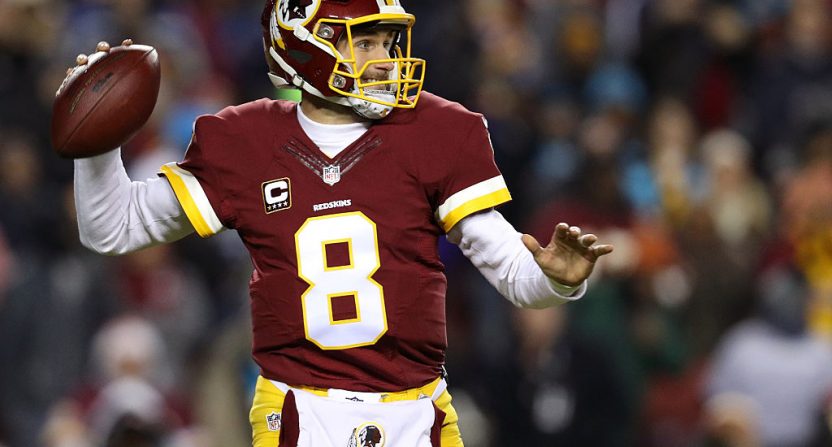 Maybe Kirk Cousins can pick up an endorsement deal with Snickers, because it appears he may not be going anywhere for a while. Despite a reported push to be traded to a new team, the Redskins apparently have zero interest in trading away their starting quarterback this offseason.

Cousins had been thought to be a potential target for the San Francisco 49ers, but the Niners just signed Brian Hoyer to a two-year deal.  At the same time, Chris Mortensen reported that Cousins had asked Dan Snyder to be traded…

Kirk Cousins appealed personally to owner Dan Snyder for a trade but was basically told not to get his hopes up, per sources.

…but Snyder and the Redskins have shown zero interest in doing so, according to Adam Schefter of ESPN…

To date, Redskins have shown zero inclination to trade Kirk Cousins and continue to insist they will not.

Adding more fuel to the fire that seems to be igniting between the Redskins and the franchise rejected a three-year offer last month from Cousins and his agent valued at $19.5 million per year. With Washington passing on that offer, it was thought the team may be more inclined to trade Cousins away in the offseason. While Schefter reports that may not actually be the case, it is still a possibility that should not be tossed aside with the upcoming NFL Draft and the rest of the offseason soon approaching.

So what exactly is happening here? On the surface, it looks as though there is a strenuous relationship brewing, especially as Washington saw one of Cousins targets skip town to sign with Tampa Bay (DeSean Jackson). If Washington isn’t going to pay Cousins, the least the quarterback can expect is the team will make an effort to build as strong a team around him as possible. It also just so happens the Washington front office is not exactly on solid footing either with the continued absence of general manager Scot McCloughan.

Are Cousins and the Redskins on the same page? It sure does not appear so, but Cousins has no other choice right now as he is under contract. So for now, all he can do is continue to move forward in a Redskins uniform and every time he makes something good happen, go to Dan Snyder and say “You like that!”

1 thought on “Kirk Cousins wanted to be traded, but Washington said “nope””