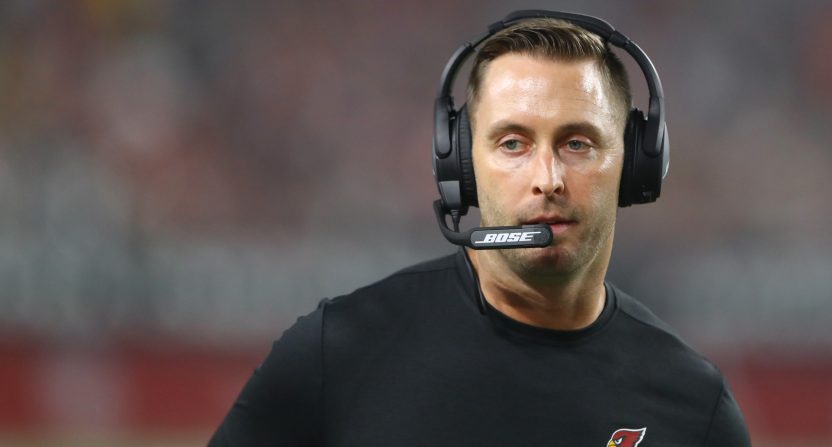 The sports graveyard is littered with former college coaches who were failures in the NFL. Many with better résumés than Kliff Kingsbury. Guys like Nick Saban, Chip Kelly, Steve Spurrier, John McKay, and Bud Wilkinson.

Kingsbury is the latest wonder boy. He just turned 40 last week. He holds the keys to the Arizona Cardinals and is entrusted with the No. 1 overall draft pick Kyler Murray. Never has someone with so little success (35-40 in six years at Texas Tech) been given such an opportunity. Kingsbury seems like your likable but mediocre coworker who suddenly lands an upper management job with his own personal washroom and parking space.

You’re left wondering: how the hell did that happen?

You can’t make an argument that Kingsbury deserved this chance. Yes, he can brag about being the college coach for reigning NFL MVP Patrick Mahomes at Texas Tech, and the Texas A&M offensive coordinator for 2012 Heisman Trophy winner Johnny Manziel. Neither of those accomplishments kept him from being fired by the organization that knows him best: Texas Tech.

Kingsbury was supposed to be the USC offensive coordinator this fall. But in one of the strangest personnel moves in recent NFL history, the Arizona Cardinals hired him. In the NFL, where every team is desperate for an edge, this was bold.

Kingsbury is the 12th former college coach this century to land an NFL job. Almost all of them have failed. And the biggest success story – Pete Carroll – had previous NFL head coaching experience. He was with the New York Jets and New England Patriots before landing at USC where he won a pair of national championships. Later, Carroll left for the Seattle Seahawks where he won a Super Bowl and remains in charge.

Jim Harbaugh is a better example of straight-from-college success. He went from building Stanford from scratch to coaching the San Francisco 49ers to within one play of winning the Super Bowl.

Since Harbaugh, four college coaches have made the leap: Greg Schiano (Rutgers to Tampa Bay Buccaneers), Doug Marrone (Syracuse to Buffalo Bills), Chip Kelly (Oregon to Philadelphia Eagles), and Bill O’Brien (Penn State to Houston Texans). O’Brien has lasted the longest at his current gig and is still there (Marrone quit Buffalo after two seasons and is the Jacksonville Jaguars coach).

Kingsbury has one substantial advantage over his predecessors. He had the No. 1 overall pick which he used to draft a player he knows well. Kingsbury recruited and coached Kyler Murray at Texas Tech before the quarterback transferred to Oklahoma. Familiarity could speed up the rookie’s learning curve. The biggest question: can Kingsbury’s offense work in the NFL?

Well, pro teams are already embracing college concepts such as the run-pass option. Kansas City Chiefs used elements of that offense to develop Mahomes, as well as the Eagles for Carson Wentz. This isn’t like the Chip Kelly fast-paced offense, which initially took the league by storm in 2013 before floundering.

In Murray’s exhibition debut, he went 6-for-7 for 44 yards against the Los Angeles Chargers. It’s impossible to draw any definitive conclusions from one series in a meaningless game. And we still don’t know exactly what Kingsbury’s NFL’s version of his college system will look like. However, it’s encouraging that Murray didn’t appear to be overwhelmed. Kingsbury and Murray are tied together. Murray’s success will determine how long Kingsbury stays in Arizona.

If Kingsbury is smart, he’ll be flexible and understand why most of his predecessors failed. It wasn’t necessarily about the X’s and O’s. Saban, Kelly, etc. didn’t lose games because they weren’t smart enough. They lost games because:

A) Talent acquisition is harder in the NFL.
B) The talent pool in the NFL is thin.

It’s easier to win in college because you have few artificial limits. If Kingsbury didn’t like his quarterback at Texas Tech, he could always recruit a better one. In the NFL, you’re hindered by the draft, salary cap, and free agency. If Murray struggles with the Cardinals, Kingsbury can’t just go out and immediately sign an elite passer.

NFL teams have a 53-man roster limit. In college, you have an 85-man scholarship limit, plus that doesn’t include walk-ons. Any given NFL team has a small number of above average players. In college, Alabama or Clemson might have at least five guys on both sides of the ball who are all-conference caliber.

College teams can also gain advantages in facilities, number of support staff members (nutritionists, technology and analytics employees, strength and conditioning coaches), fund-raising and television exposure. In the NFL, every team roughly the same in those departments.

What does it take for a college coach to succeed in the NFL? A little luck doesn’t hurt.

Harbaugh walked into a situation where most of the talent was already there: Alex Smith, Frank Gore, Vernon Davis, Joe Staley, Mike Iupati, Patrick Willis, Justin Smith, NaVorro Bowman, and Ahmad Brooks. It just needed better coaching than it received from Mike Singletary.

For Kingsbury to win, he might need a combination of what made Carroll and Harbaugh successful. Some luck along with inheriting some good players. The Cardinals had the league’s worst record last year (3-13), so there might not be much to work with. Future Hall of Fame of wide receiver Larry Fitzgerald is 35 and coming off the worst season of his career. Tailback David Johnson is 27, but also had a career-low year in 2018.

Expectations are low for Kingsbury’s rookie season. Arizona is expected to be bad again. He’ll likely get at least two years to prove himself. If it doesn’t work out, he can always go back to college.