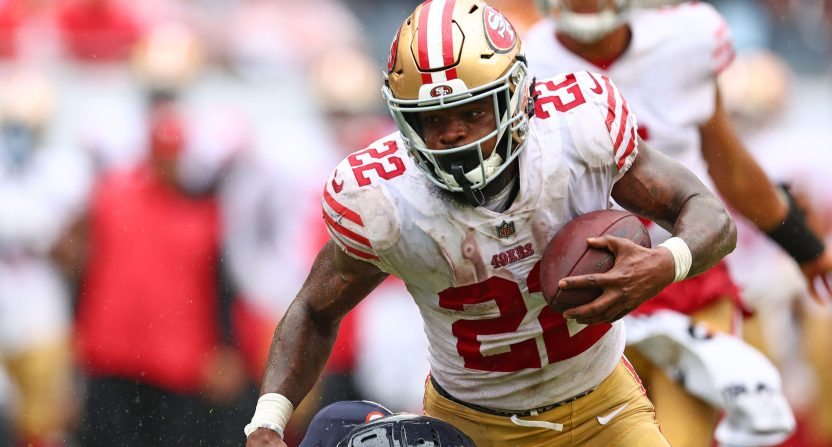 The San Francisco 49ers suffered a disappointing loss in Week 1 to the Chicago Bears, and they also lost their starting running back in the process. Elijah Mitchell suffered a knee injury during the game — after having six carries for 41 yards — and is expected to miss up to two months due to a sprained MCL.

So, with Mitchell out, what are the 49ers going to do at running back?

Shanahan told the media that the 49ers “will go with the hot hand in the game.”

“For the most part, that’s what it was last week,” Shanahan said on Wednesday. “We will get a feel for them in these three days and we will go with the hot hand in the game.”

Shanahan added that the rookie backs are “very similar,” while noting that there’s “a lot more than playing football with [the 49ers] than just running the ball.”

“Both of them, I think they are very similar,” Shanahan said on Wednesday. “They don’t mess around, they get downhill. Two types of styles that we need and what we like, but there’s a lot more to playing football with us than just running the ball.”

There’s also do-everything wide receiver Deebo Samuel, who actually had the most non-quarterback carries — Trey Lance had 13 carries for 54 yards — in Sunday’s loss, and he was very effective with eight rushes for 52 yards and a touchdown.

Deebo off to a good start in 2022. pic.twitter.com/MxvCnBKm50

Shanahan and the 49ers are always unpredictable with their rushing attack, and it will be especially difficult to know what to expect now.

Wilson, 26, will likely get the first shot at being the primary back, and he has experience being just that for the 49ers, highlighted by a 183-yard rushing effort in Week 16 of 2020. However, he was ineffective against Chicago, with nine carries for 22 yards. In 2021, he had 79 carries for 294 yards (3.7 AVG) and two touchdowns.

For fantasy football managers, Wilson is the safest best (and especially in terms of Week 2), but Davis-Price and Mason may offer more upside.

With a very raw quarterback in Lance (who struggled in Week 1), the Niners would like to be able to depend on their running game as much as they can, so it will be very important that they’re able to get this department performing at a high level while Mitchell is out.

After being a sixth-round pick in the 2021 NFL Draft, Mitchell was highly effective as a rookie, running for 963 yards and averaging 4.7 yards per carry.

Perhaps the Niners can find an impact rookie contributor this time around from Davis-Price or Mason. Davis-Price was a third-round pick out of LSU in the 2022 NFL Draft, while Mason was signed as an undrafted free agent out of Georgia Tech.

The Niners will take on the Seattle Seahawks on Sunday in Week 2.