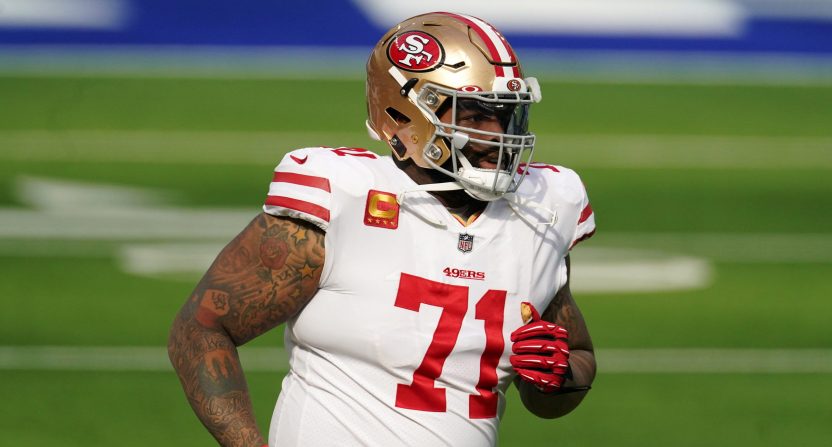 The San Francisco 49ers are back in the NFC Championship Game for the second time in three years and, if they win, they’ll be able to get back to the Super Bowl just as often.

The more weapons they have to defeat the high-powered Los Angeles Rams, the better. This is why it would be critical for them to have All-Pro offensive tackle Trent Williams back in the lineup. Williams, who injured his ankle in the win over the Green Bay Packers last weekend, hasn’t practiced for three days and has been listed as “questionable” on the injury report.

However, head coach Kyle Shanahan told reporters on Friday that Williams is “adamant” about playing in the big game.

“I feel the same way that I did at the beginning of the week,” Shanahan said. “He came out for a walk-through today. Trent’s adamant that he’s going. He was last time, too. I believe Trent when he says that he’s going to do everything he can to play. So, I’ll be surprised if he doesn’t. But I was surprised last time. I was also surprised he was able to finish the game versus Green Bay. So hopefully, his mindset will be how his body reacts on Sunday and we know it’ll help us a lot. But if not, we’ll deal with it.”

If Williams is unable to play, second-year offensive lineman Colton McKivitz will get the nod.

This year was Williams’ ninth Pro Bowl selection and since he arrived in San Francisco he’s helped anchor an offensive line that’s allowed Jimmy Garropolo to perform well at quarterback and Deebo Samuel to become a star for the franchise at running back. Williams also has some impressive moves of his own.

Trent Williams in motion is a cheat code!!! 😩🤣😮‍💨 pic.twitter.com/0bYOiwvtkU

We’ll see if Williams is able to go on Sunday when the Niners take on the Rams in front of a lot of their own fans in SoFi Stadium.