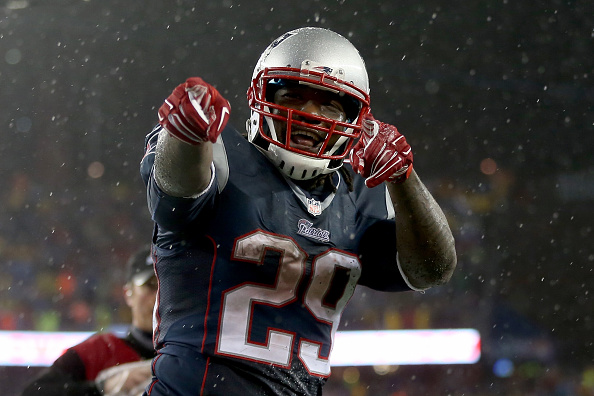 The New England Patriots are down to pulling guys off the street to run the football. LeGarrette Blount was officially placed on Injured Reserve on Tuesday, ending his season and adding another body to the pile of 16 Patriots unable to suit up the rest of the year. Blount joins fellow Pats running back Dion Lewis on IR, leaving Tom Brady’s options when he turns to handoff to his tailback somewhere between Brandon Bolden, James White an Montee Ball, who New England signed to their practice squad.

The Patriots don’t even have the misfortune of boasting the longest list of names on IR this season, as New England is tied with the New York Giants at 16 players (and counting), four behind the Baltimore Ravens, with 20, according to Spotrac’s updated list as of December 15. The long list of injured players isn’t a new trend this year, mind you. The Giants had 20 players on IR at this time last year, for example, a trend the NFL has been spending countless hours and significant dollars to curtail each season.

And yet, with all the time and money put in to keeping players healthy and safe, with three weeks to go in the regular season, the league now has 320 players on Injured Reserve. That’s more than six full teams.

That number, for what it’s worth, isn’t even close to the number of players who are actually injured in the NFL. Tony Romo, for example, has not been placed on IR by the Dallas Cowboys despite breaking a collarbone twice, and being officially—yet unofficially, it seems—out for the year. Romo is listed on the most updated injury report as “Doubtful”, as big an indictment toward the lack of seriousness some NFL teams give major injuries as anything you will see this year.

There are 119 players listed on the Week 15 injury report after Tuesday’s team practice sessions—including the likes of Andy Dalton, who is also listed as “Doubtful” for the Cincinnati Bengals this week despite being out for the remainder of the regular season with a busted thumb—and with 1,696 active players in the NFL, less than 10 percent of the league being listed as questionable or doubtful at this point in the season is actually quite impressive. It’s the nearly 20 percent already done for the year that seems like a lot, especially when Super Bowl contenders are down to their third, fourth and fifth options at key positions on the field.

Let’s remind Roger Goodell of these numbers the next time he brings up the 18-game proposal.

It’s also worth noting that just seven players on IR due to concussions—certainly a hot topic in NFL circles these days—while 26 players are out with shoulder injuries, 24 are out with ankle or Achilles issues, 23 with foot ailments and 101, many of which account for those on season-long IR, are on the list because of knee injuries. There are also 25 players on the list with “undisclosed” injuries, which could be a clever way to stash a player who doesn’t account against the roster limit, or could be a team covering up a guy missing half his brain. We don’t know.

What we do know is Blount is the 29th running back to make the IR list so far this season, joining the likes of Le’Veon Bell, Thomas Rawls, Justin Forsett, Carlos Hyde, Arian Foster, Jamaal Charles, Reggie Bush and Mark Ingram who were starters or productive back-ups now sitting on the sidelines in street clothes, many of who still stand around (for those who can actually stand) hoping their teams can survive the playoff push without them.

The NFL salary cap for 2015 is roughly $143 million. Per Spotrac, the total cap hit for the players on IR is $241.5 million, with the actual cash money total somewhere north of $165 million. That’s a lot of dead NFL money. Thankfully, with all the injuries we’ve seen this year, no, we don’t mean that literally.