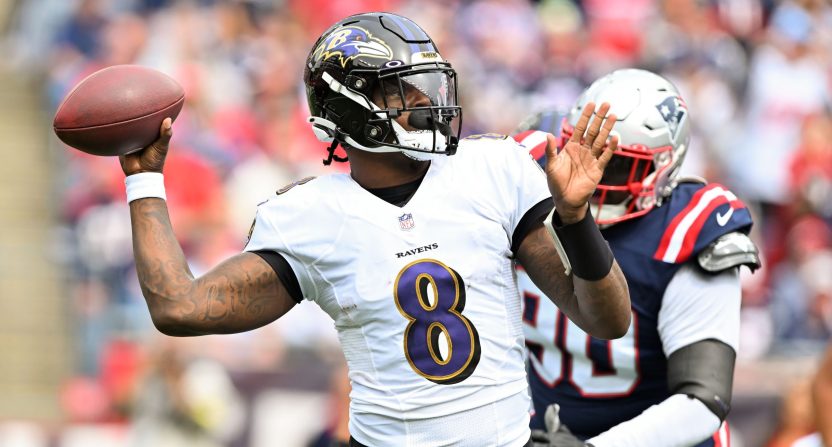 Normally, someone as accomplished as Lamar Jackson, wouldn’t be in this position. And yet, here we are. Maybe it’s because you can’t truly compare Jackson to anyone.

Jackson, who’s playing in the final year of a rookie contract, is betting on himself. So far, it seems like that decision will pay huge dividends. The 2019 NFL Most Valuable Player is gunning for his second MVP award.

Sports Betting Dime lists Jackson as tied for third in the MVP odds with Jalen Hurts, trailing Josh Allen and Patrick Mahomes. But if Jackson continues to put up video game numbers, his statistics will be hard to ignore.

Jackson leads the league in passing touchdowns (10) and passer rating (119). He’s tied for fourth in rushing yards (243). His start is not only amazing, but it’s also unprecedented. If he keeps up his current pace, he would become the first player in NFL history to average 240 passing yards and 80 rushing yards.

There’s a long way to go with 14 regular-season games remaining. But what once seemed ludicrous now appears plausible.

Tune in on FOX! pic.twitter.com/oFXuWYJfVh

Look at what Jackson did to Bill Belichick’s defense in Week 3. He passed for four touchdowns and rushed for 107 yards and a score in the Baltimore Ravens‘ 37-26 victory at New England. Belichick might be a mastermind, but sometimes there’s absolutely nothing you can do against a unique talent.

What makes Jackson’s numbers even scarier is that he’s doing all this without the benefit of a true No. 1 wide receiver. His best pass-catcher is tight end Mark Andrews. The Ravens traded away his top wideout in the off-season when they dealt Marquise Brown to the Arizona Cardinals on draft day.

Jackson has young receivers who are still trying to establish themselves in Rashod Bateman and Devin Duvernay. The Ravens don’t have a running back with more than 17 carries. Plus, Baltimore’s defense is giving up a league-worst 458 total yards per game.

Jackson has been a one-man gang, carrying this team to a 2-1 record. The Ravens would be undefeated if not for an implosion in Miami. In a contract season, Jackson seems ready to command one of the biggest paydays in NFL history.

The Ravens could have locked him in earlier. Both sides couldn’t come to an agreement before the season. ESPN’s Chris Mortensen reported that Jackson turned down a six-year contract offer that included $133 million fully guaranteed at signing. A huge amount of money, no doubt, but less than the $230 million fully guaranteed deal that Deshaun Watson received from the Cleveland Browns.

Jackson will turn only 26 in January. He could have two MVP awards before reaching the prime of his career. That’s a solid argument for demanding a record-setting contract. Baltimore might put the franchise tag on Jackson, which could result in a $46 million salary for 2023, according to Pro Football Talk’s Mike Florio.

It’s worth noting that Allen, who was selected in the same draft class as Jackson, received a contract extension last year. Jackson has been to two Pro Bowls and has that MVP award. Allen has been named to one Pro Bowl.

Young franchise quarterbacks are hard to find. Some teams spend decades looking for one. And when they do, they are quick to give them long-term deals. Baltimore, one of the smartest clubs around, hasn’t done that. Perhaps they are worried about Jackson’s durability. That’s a legit concern.

Jackson missed five games due to injury last year. And who knows how his style will hold up in the long run. There’s a risk for the Ravens in offering him a massive contract. There’s also a risk for Jackson right now. He’s putting his body on the line for Baltimore week after week with no financial guarantees after this season.

It was interesting that former Ravens star Ed Reed voiced concerns about Jackson’s playing style by saying, “He has to be smart because it is a business and they will use that sh*t against you whether you like it or not.“

Jackson is an MVP contender. We’ll see how much Baltimore truly values him.