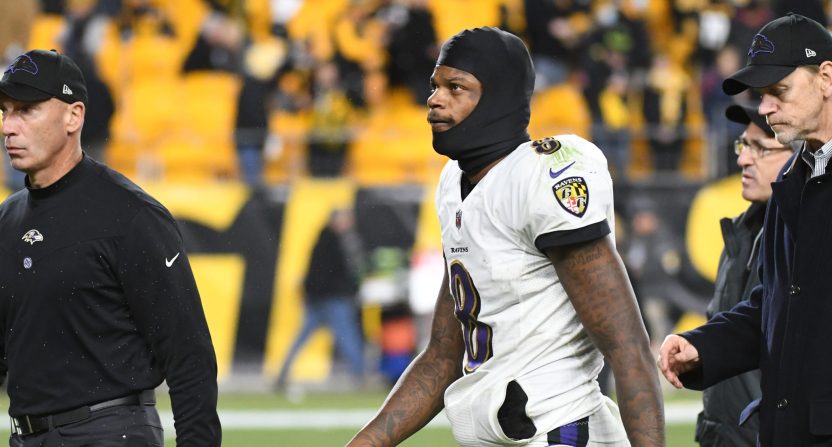 The Baltimore Ravens missed out on the playoffs last year for the first time since 2017, finishing the season with an 8-9 record.

The Ravens lost their final six games last year. Much of that was due to the absence of quarterback Lamar Jackson, who missed the final four games of the year due to a nagging ankle injury. That suggests that Jackson is as important as anyone in the NFL to their team’s success.

It’s been an interesting offseason around Jackson in Baltimore, as he missed OTAs (voluntary team activities), which caused some questions to be raised by Ravens’ fans. The former MVP-winning quarterback is in the final year of his contract, and a new deal will need to be made before the 2023 season if the Ravens want to retain the two-time Pro Bowl quarterback.

Jackson missing offseason activities in Baltimore to this point had many questioning just how much he wants to stay with the Ravens moving forward. But Ravens’ fans can now breathe a sigh of relief, as it has emerged that Jackson will be returning to the Ravens ahead of their three-day mandatory minicamp, which is set to begin on Tuesday. (Some other QBs have also skipped OTAs but attended minicamp, including Green Bay Packers‘ quarterback Aaron Rodgers.)

Star cornerback Marlon Humphrey posted a video Monday morning of Jackson being in the Ravens facility.

This news has many Ravens’ fans excited to see what the team can do next season with seemingly a fully healthy Lamar Jackson.

Still would like to see Lamar Jackson protect himself with a contract extension as soon as possible, and as soon as everything meets his liking– with minicamp practices and training camp ahead. Good to see him smiling with teammates today though.

The Ravens just need to pay up already, laughable that they haven’t 6 years, 282 million all guaranteed.

This should dispel rumors about Jackson’s commitment to the franchise. While Jackson has yet to sign an extension with the team, he appears to be betting on himself heading into this upcoming season.

Ravens general manager Eric DeCosta has said that Jackson hasn’t been interested in engaging in contract talks and that the team will “work at Lamar’s urgency” on an extension.

The team and Jackson are both coming off a down year, and an impressive 2022 campaign should be all the Ravens need to see to make him amongst the highest-paid quarterbacks in all of football in 2023.