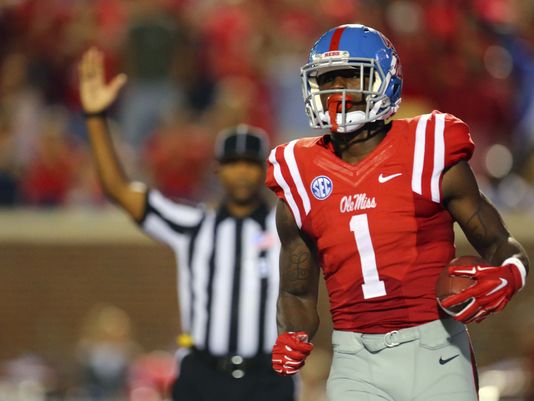 Laquon Treadwell is making an intelligent decision by not running the 40-yard dash at the 2016 NFL Combine.

Running in the most hyped drill at what’s become the central event of draft season could only hurt his stock. In fact, he owes it to himself not to run.

Treadwell entered Ole Miss in 2013 with accolades galore from recruiting giant Rivals.com. He was listed as the No. 1 receiver in the entire country. Overall, only Robert Nkemdiche, Vernon Hargreaves III, Jaylon Smith — all likely first-round picks in the 2016 draft — and Auburn standout Carl Lawson ranked above him.

As an 18-year-old, true freshman in the NFL’s farm system also known as the SEC, Treadwell had 72 receptions for 608 yards with five touchdowns. Before a scary leg injury nine games into his sophomore year, he racked up 48 grabs for 632 yards with five more scores. Returning from a broken tibia and dislocated ankle in 2015, the pass-catching focal point of the Rebels’ offense erupted for 82 receptions, 1,153 yards and 11 touchdowns, including a six-catch, 71-yard, three-touchdown ultimate send off in Ole Miss’ 48-20 rout of Oklahoma State in the Sugar Bowl.

Of NFL.com draft analysts Daniel Jeremiah, Charles Davis, Bucky Brooks and Lance Zierlein, Jeremiah is the only one not to have Treadwell as his No. 1 receiver — he has him one spot behind Baylor’s Corey Coleman at No. 17 in his Top 50 prospects list. Scout’s Inc. has Treadwell as the top wideout in the 2016 class, and the only one in the Top 32.

Treadwell has done everything between the lines to earn the spot as the consensus top wideout in his draft class. But at 6’2″ and 210 pounds, he’s not a burner. The NFL likes burners.

On Monday, when Football Guys’ Scott Bischoff reported Treadwell had elected not to run, hints of skepticism about the receiver’s speed, or lack thereof, became widespread.

Before the combine, film trumps everything. Afterward, well, not so much. Regardless of what some NFL executives say to the media about the medical tests and interviews being considerably more important than the on-field testing in Indy, the NFL Combine matters, and it’s one of the final pieces of the scouting puzzle.

Why should Treadwell create concern about his ability when he doesn’t have to? His production and style of play in the SEC were the reasons he emerged from the 2015 college football season as, to most, the best receiver available in the draft. But if he were to have run a slower time than a few of his “competitors,” NFL decision-makers might — some for the first time — seen his name “behind” other receivers in a football-related activity… and who knows what that could’ve done to their subconscious.

The obvious and most prevalent counter to this argument is a thought centered around how admirable it is for prospects to simply have no fear and “just go out there to compete.” In essence, it’s an attempt to lessen the impact of the combine and evoke an idea that the top prospects can’t really hurt their draft stock in this showy, seemingly made-for-TV exhibition.

That theory is short-sighted and, in a way, selfish. Yeah, we’d all love to watch every prospect complete the gamut of the combine. In reality, though… the prospects have to do what’s most logical for them, what helps them get drafted as high as possible.

Last year, No. 5 overall pick Brandon Scherff signed a contract worth just under $19 million. The No. 20 overall pick, Nelson Agholor, inked a deal worth just over $8 million.

So, if anything, people “assuming” Treadwell would run relatively slowly is significantly better than him actually running slowly in the spotlight at Lucas Oil Stadium with millions watching at home. Sure, as a whole, the 40-yard dash is overrated, but it probably carries the most weight in evaluation of the wide receiver position. And we’ve often seen prospects generally considered the best at their positions choose not to perform specific events at the NFL Combine. Most namely among them, Andrew Luck, the most sure-fire quarterback prospect since Peyton Manning, decided not the throw at the 2012 combine. (I think the reason we’ll see all the top quarterbacks throw this year is due to there being no semblance of a consensus on who’s the No. 1 signal-caller.)

Look, I’m a major advocate of the combine. Like many, I eat it up but know it’s not all-encompassing. Beyond the spectacle of it all — which makes it fun — some of the drills, like the 40, the three-cone drill and 20-yard shuttle do have useful predictive power for most of the prospects. Actually, for a while now, I’ve thought the NFL executives who say annual that the combine doesn’t matter are in fact the same people who pay closest attention to the numbers — yes, out to the hundredth place — and want to downplay its importance to their 31 opponents in hopes of maintaining an edge.

The combine represents a tremendous opportunity for the “who’s that?” prospect from South Louisiana State Tech A&M to showcase his explosive athleticism and send scouts scurrying back to the film room to watch his tape. The same goes for the teammate of the elite prospect who was overshadowed on the field his entire college career or the star of the cellar dweller program that never played on national TV. But when you’ve proven, on the field, to be the leading man at your position, it’d make no sense to give your challengers a chance to do something of importance better than you, especially if you don’t feel 100% confident you can live up to “top prospect” expectations in a given drill or measured activity.

Wait until your school’s Pro Day — like Treadwell is — where trigger fingers on the stopwatches are typically and unsurprisingly rather quick.

The combine provides a level playing field for prospects to prove themselves, or, you know, open some eyes. But if you’re like Laquon Treadwell, and you’ve already done that in spades on the field, that’s all you need.