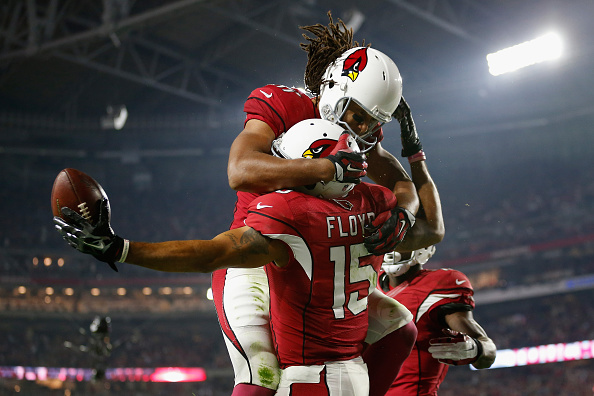 When the Seahawks so thoroughly dominated the Vikings last week, they made quite a statement, unleashing hell on Minnesota to stay three games behind first-place Arizona in the NFC West.

On Thursday, it was the Cardinals turn to face off vs. Minnesota, and Arizona got a much different Vikings squad. Arizona barely squeaked out the narrow 23-20 victory to officially clinch a playoff spot. But the way Arizona won showcased the reason the Cardinals are one of the scariest teams in the league — and the NFC’s best chance to win the Super Bowl. And why the Seahawks have almost no chance to catch the Cardinals in the division.

Two players — neither of whom racked up enormous stats during Arizona’s victory — were key. Two veterans who have been Cardinals teammates for the past eight years, and the two who have experienced all the organization’s ups and downs.

Thanks in large part to receiver Larry Fitzgerald and defensive lineman Calais Campbell, Arizona beat the Vikings on Thursday night and are 11-2, well on the way to a division championship and, perhaps, a chance to win its first NFL title since 1947, when the Cardinals played their home games in Chicago.

For Fitzgerald, it wasn’t about making the game-winning touchdown catch or grabbing some crazy, diving, third-down reception to keep a drive alive. No, the biggest contribution from Fitzgerald occurred when he blocked for one of his teammates, a block that allowed receiver Michael Floyd unfettered access to the end zone. Fitzgerald caught five passes for a pedestrian 41 yards, but this block — this one helluva block — was a gamechanger.

The pancaking of safety Anthony Harris also brought out compliments from current and former NFL offensive and defensive linemen. It was that good.

@LarryFitzgerald with the huge block. Dude is a #beast

The Cardinals fans knew. As soon as Floyd finished his 42-yard score to give the Cardinals a 17-10 lead midway through the third quarter, they chanted “Larry, Larry, Larry”, a toast to perhaps the best-blocking and most-unselfish receiver in recent memory.

Arizona crowd loves Fitzgerald so much they are chanting "Larry Larry" for his blocking on Michael Floyd's touchdown.

Campbell, meanwhile, has had a quiet season. Entering the game with only 1.5 sacks — not great for a man who averaged more than seven for the previous six seasons — Campbell made a huge impact in the first half. After recording zero tackles last week vs. the Rams (and only five overall tackles in the past five games), he racked up four tackles, three for a loss, and a sack in the first 30 minutes.

He was a different player Thursday, especially when you remember that, a month ago, coach Bruce Arians said this.

“He needs to be dominating the game,” Arians said. “… He loses his technique sometimes and doesn’t use his hands … He’s got the talent (to dominate a game), and he’s shown he can. He needs to do it all the time.”

Campbell was a little more invisible in the second half on the stat sheet — though Teddy Bridgewater, who was walloped by Campbell a few times after releasing the ball, probably would say different. Until, that is, defensive end Dwight Freeney’s spin move flummoxed Minnesota left tackle Matt Kalil on third down and with the Vikings in field-goal range, allowing Freeney to knock the ball out of Teddy Bridgewater’s hand and onto the turf. And where did the ball end up? In Campbell’s grasp with five seconds to play.

Fitzgerald and Campbell haven’t won a playoff game in six years. Before Arians took over in Arizona, the franchise — and the franchise’s best player, Fitzgerald — were lost. The Cardinals played in the Super Bowl in the 2008 season and then made the playoffs the next year, but after that, they lost 30 of their next 48 games.

But with Arians continuing his emergence as one of the best coaches in the league, with Carson Palmer continuing his late-career renaissance, with the No. 1 offense in the league (by yardage and by points) recording wins, with Floyd and John Brown making tough catches, with rookie David Johnson rushing for 191 yards in the past two games, and with Tyrann Mathieu and Patrick Peterson making impact plays in the secondary, the Arizona Cardinals are the most dangerous team in the NFC.

The Panthers are undefeated, and Cam Newton is the leading candidate for NFL MVP. But the Cardinals may have a better chance to win the Super Bowl. For all the reasons listed in the paragraph above, but also because of two veterans who make the subtle plays that win their team games.

For Fitzgerald, that’s all he wants now — to triumph.

“At this point it’s about winning,” Fitzgerald told ESPN earlier this season. “When you’re younger, you’re trying to get your next deal and get to Pro Bowls. It’s a lot more me, me, me when you’re building your résumé. You want touches and touchdowns. Well, I’ve got numbers. I’ve got money. I’ve got everything beside what we all play for. And that’s a championship.”

The win over Minnesota, and getting back to the playoffs, was the first step.