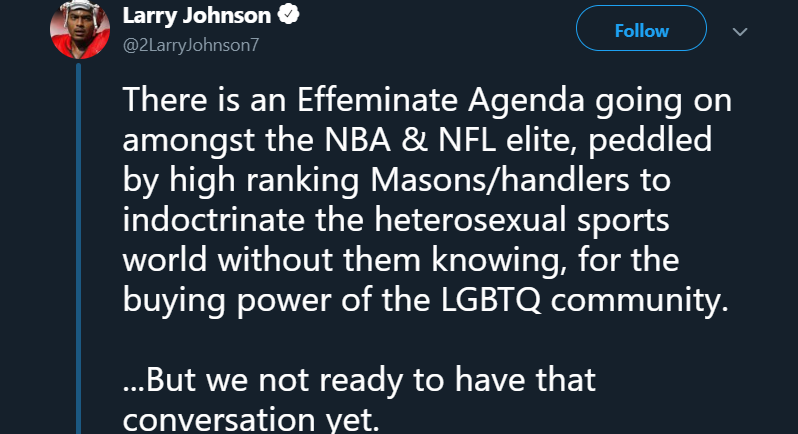 From Franco Harris’ search for Joe Paterno conspiracies through Merrill Hoge’s claims that Boston University’s concussion researchers “cheat, lie and abuse/suppress science,” there have been some weird NFL conspiracy theories over the years, but former NFL running back Larry Johnson‘s Twitter rant Thursday stands as one of the strangest yet. Perhaps in response to the news of NFL free agent DE Ryan Russell coming out as bisexual, Johnson claimed that there’s a Freemason-led conspiracy to promote an “Effeminate Agenda” in sports and  “to indoctrinate the heterosexual sports world without them knowing for the buying power of the LGBT community.”

It should be noted that Johnson himself told Kent Babb of The Washington Post in 2017 that he believes he has brain disorder chronic traumatic encephalopathy (CTE), that he has anxiety, paranoia, and occasional self-destructive impulses, that he’s considered violence towards himself and others, and that he has growing gaps in his memory. So there’s maybe more going on here than just Johnson saying ridiculous things. And he’s said plenty of other ridiculous things recently, including accusing the Trump administration of “witchcraft numerology” and wondering why there haven’t been mass shootings at Masonic temples and the Church of Satan, or his thoughts on Pizzagate and Jeffrey Epstein, plus his pinned tweet of a presentation that “explains why you were kept from the truth and into Reality Shows, stripper & drug culture, sports, mental slaves.” But the things he said about the NFL and NBA Thursday are still noteworthy given his status as a prominent former player, and given his 15,000 followers. Here’s a screenshot of his tweets in case he takes them down:

On the Masons part of this, ESPN’s Keith Law had an excellent response, referencing The Simpsons’ “Homer The Great” and The Stonecutters:

Beyond that, this is just off the rails. It’s unclear why there would be Mason involvement in “indocrinating the heterosexual sports world,” how that would in any way bring in “the buying power of the LGBTQ community” (yes, there were quite a few Michael Sam jerseys sold, but if anything, the NFL’s exclusion of him only made the LGBTQ community mad at them), and how players wearing the outfits they like is promoting a LGBTQ agenda.

However, Johnson (who faced multiple charges around domestic violence and violence against women during and after his career, including a domestic violence battery and assault conviction in 2013) does have a point on the NFL’s much-criticized past pinkening. That pales in comparison to the rest of the nonsense he’s spewing here, though. It’s unclear why Johnson felt the need to unload these thoughts on the internet, but they certainly don’t make him look good.