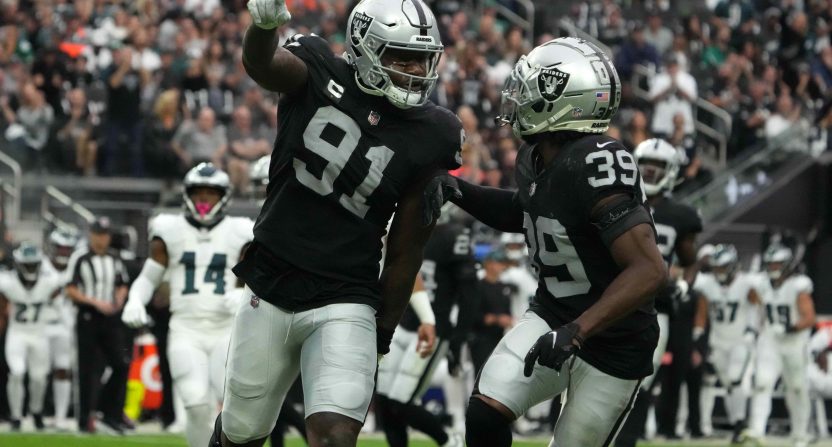 Jones should give the Raiders some help to get to some of the elite quarterbacks in the AFC West, That includes the Denver Broncos‘ big offseason acquisition of Russell Wilson.

This was a rather surprising move considering the Raiders already had Maxx Crosby and Yannick Ngakoue as their top pass rushers. But another move on Wednesday provided some more clarity on that situation. The Raiders agreed to a deal with the Indianapolis Colts to trade Ngakoue (seen above last fall) in return for cornerback Rock Ya-Sin.

Sources: #Raiders pass-rusher Yannick Ngakoue is expected to be traded to the #Colts in a deal that includes CB Rock Ya-Sin.

Ngakoue had a very solid season with the Raiders in 2021, recording 10 sacks on the season and helping the team’s defense improve significantly. Meanwhile, Ya-Sin was a starting cornerback on a very impressive Colts defense that had the second-most takeaways last season. The trade garnered a ton of reactions around the NFL world, with many speculating on who got the better of this deal.

It doesn't matter how good your secondary is when you don't have a pass rush. This was a necessary trade and the Colts come out on top. https://t.co/LbycerSDUA

Paye, Dayo and Ngakoue… That room looks so much better than this time last year… https://t.co/w4FHvWz37p

Awh man! Thank you Rock for all that you have done for us the pass few years! I’m going to miss ya Que but wish you nothing but the best! Go be that dawg we all know! https://t.co/gwmhGcIats

Ngakoue’s 5th team in 7 years lands him back in AFC South https://t.co/rzWogXjl9V

Rock Ya-Sin had an underrated year last year. The #Raiders get their EDGE in Chandler Jones opposite Maxx Crosby and a young corner on the rise in Ya-Sin.

On paper, this certainly looks like a trade that could benefit both teams for years to come. Nkagoue fills a much-needed hole that the Colts have had for years, while Ya-Sin does the same for the Raiders.

The Raiders’ offseason moves have certainly been questionable in the past, but signing Jones and then making this move for a very promising cornerback like Ya-Sin seems like a good strategy to keep up with the rest of the improving teams in the AFC West.