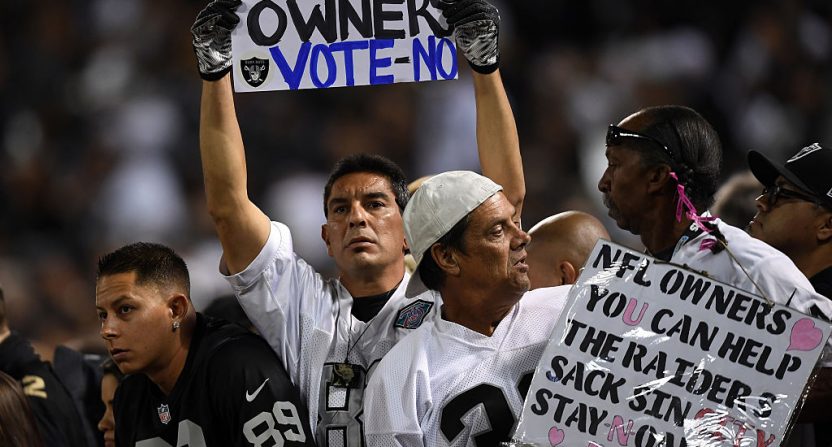 The Raiders are going to Vegas, baby!

Likely a formality in spite of recent hiccups with future stadium plans, the NFL owners showed nearly unanimous support to allow the Raiders to relocate from Oakland to Las Vegas. Only one vote stood in the way of a unanimous decision (thanks, Dolphins), but the Raiders had more than enough votes to be able to get the green light to leave Oakland (again).

It's official: The #Raiders are going to Vegas. They cleared the 24 vote threshold.

The city of Oakland tried to do all it could to ask the NFL to hold off from taking a vote so city planners could put together one final pitch for a stadium for the Raiders to call home, but the NFL moved ahead with their planned vote to get the ball rolling on what was probably an inevitable result in the grand scheme of things. The talk about the Raiders going to Vegas has been floating around for a while now.

So, how soon will the Raiders be bolting from Oakland?

“We plan to play at the Coliseum in 2017 and 2018, and hope to stay there as the Oakland Raiders until the new stadium opens,” a statement from the Raiders confirmed. “We would love nothing more than to bring a championship back to the Bay Area.”

So there you have it. The Raiders are planning on two more seasons by the bay before heading to the desert. Of course, there could still be a chance the Raiders are still in Oakland in 2019.

The timeline for the proposed stadium could take somewhere between 30 and 36 months to complete. That probably leaves the Raiders in Oakland through the 2019 season. However, coming up with the necessary funding for the ambitious stadium plans still has some hurdles to clear itself before moving forward. Sheldon Adelson previously withdrew his $650 million investment in the stadium, making the $1.9 billion pricetag just a bit more cumbersome.

So, it’s finally happening. The Raiders are going to Las Vegas, giving the gambling capital of the United States its second professional sports franchise to go with its expansion NHL franchise, the Golden Knights. What’s next for Las Vegas? The NBA?