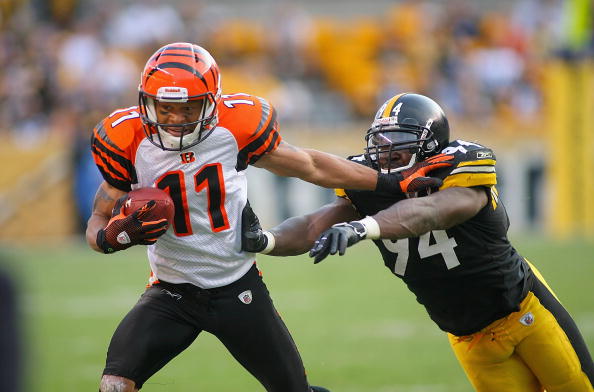 Former NFL receiver Laveranues Coles wants to open a, um, dancing establishment in Jacksonville, but is having some trouble with the city’s laws.

According to The Florida Times-Union, Coles filed a federal lawsuit challenging a Jacksonville law the restricts “sexually themed bars.” The suit argues that the regulation “constitutes an unconstitutional prior restraint,” with arbitrary standards for exceptions that leave all discretion to the Planning Commission and the City Council.

Coles applied for an exception to the law for his company, Trouble Livin Life LLC, to build a “restaurant and dancing establishment” on Phillips Highway but was rejected “based upon the city’s distaste or dislike of the speech that plaintiffs anticipated would be conducted on the premises,” according to the Times-Union.

Naturally, Coles invoked the constitution to defend his right to run a bikini bar.  Via the Times-Union:

The suit described dancing that had been planned as being “performed before a consensual audience, all over the age of 18 years, who are desirous of receiving and enjoying the message conveyed by the entertainers of normal human sexual interest and sensuality.”

That message wouldn’t be obscene, the suit said, arguing it’s a form of expression protected under the Constitution’s free-speech guarantees.

Coles could just take his business to a different city with lighter standards, but he seems quite committed to opening up the bar in his hometown of Jacksonville.

Coles played 10 NFL seasons for the Jets, Redskins and Bengals before retiring in 2010. He had 674 catches for 8,609 yards and 49 touchdowns in his career.

We always hear how tough it is for athletes to transition to retirement, and Coles is trying to make his post-football life work, albeit in a slightly unconventional way. And it seems he won’t let the city of Jacksonville get in the way of his big plans.