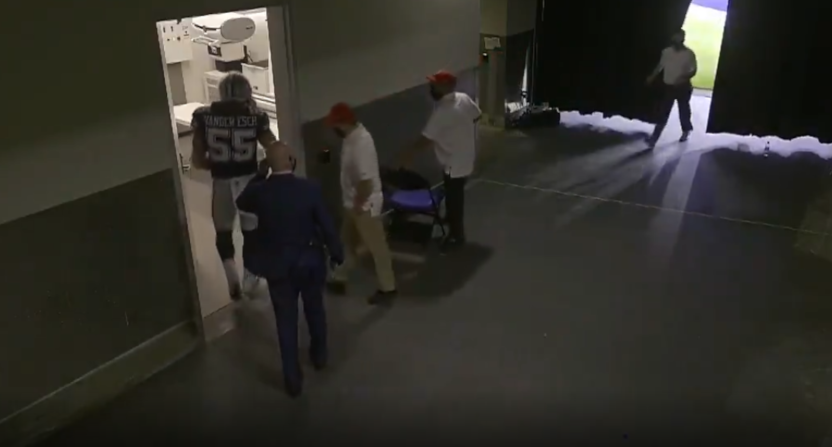 Sunday night’s Dallas Cowboys-St. Louis Rams game set up as a great return opportunity for Cowboys’ middle linebacker Leighton Vander Esch, who shone as a rookie in 2018, setting a team rookie record with 140 tackles (plus two interceptions, five quarterback pressures and three tackles for loss; he was also named a second-team All-Pro that season and was added to the Pro Bowl that year as an injury replacement), but only took part in nine games last year before a neck injury ended his season, and led to him having surgery for spinal stenosis. And on Sunday night, Vander Esch was playing well for the Cowboys before an early injury led to him being evaluated on the sidelines and then removed, not to return:

They're looking at his collarbone, according to Michele Tafoya.

After a #Cowboys rookie record 140 tackles in 2018, Leighton was limited to nine games last fall due to a neck injury. pic.twitter.com/XCQa6mH4TZ

A little later, NBC’s Michele Tafoya confirmed that Vander Esch wouldn’t return to the game. And that’s certainly unfortunate for Vander Esch, especially after how he was so fired up to play again, and especially after this came after two previous neck injuries (at Boise State in 2017 and then with the Cowboys last year). Here’s what Vander Esch said to ESPN’s Todd Archer last month:

“I’m not worried about my neck anymore,” he said. “I don’t talk about it. It is what it is and people can think what they want to think. I’ve been training for four months hard, and I’m already better than I was before I got hurt with the injury. It doesn’t affect me. I just don’t talk about it. It’s not worth wasting time about.”

We’ll see if this winds up being another long-term injury for Vander Esch. If it does, that’s a blow not just for him, but also for the Cowboys’ defense; he was expected to be a key contributor this year, and was designated as the on-field communicator calling defenses. Losing him early in Week 1 is a big loss for Dallas even if it’s just for this game. And if he winds up being gone for longer still, that’s a further problem for their defense.

[Image via a clip from Jay Tust on Twitter]