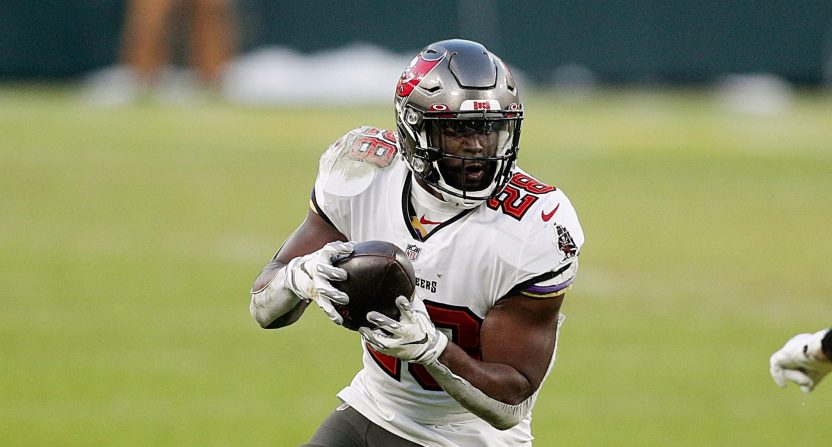 The Tampa Bay Buccaneers have been without star running back Leonard Fournette for the last few weeks, but it appears that they could be getting him back at the perfect time.

Ian Rapoport has reported that Fournette returned to practice yesterday from his hamstring injury and that there is a very good chance that he will play this weekend.

From @GMFB: The #Bucs got RB Leonard Fournette (hamstring) back at practice, while #49ers pass-rusher Nick Bosa (concussion) was a full participant. pic.twitter.com/374y59xNIH

Fournette was supposed to play in the Buccaneers playoff game last week against the Philadelphia Eagles, but head coach Bruce Arians decided to air on the side of caution and keep him out to be up to full strength going forward.

The former top-5 pick in the NFL draft famously earned the nickname ‘Playoff Lenny’ last season after playing a huge role in the Buccaneers’ run to the Super Bowl last year.

Rapoport left some wiggle room due to the nature of his injury for a potential setback in practice this week, but based on this post from Fournette on his social media earlier this week, it appears that he will try and give it a go against the Los Angeles Rams.

Appreciate all the birthday luv, man only if y’all knew the roads I had to take to get here, all the people I lost in my that can’t experience everything with me Thank Y’all and I WILL SEE YOU GUY SUNDAY pic.twitter.com/3RyNRJIgB9

Fournette would play a huge role for the Buccaneers should he be able to go. Here are some reactions around the NFL world on the news of Fournette’s possible return.

Wheels up 🛫 for Lombardi Lenny https://t.co/A7nErRpBxo

Bruce Arians says Leonard Fournette looked good this week and did not have the same setback he had last week.

The team has been cycling through running backs Keshawn Vaughn and Giovanni Bernard as their top rushers over the past few weeks, and Fournette would bring some much-needed consistency to what has been an inconsistent running back room for the Buccaneers.