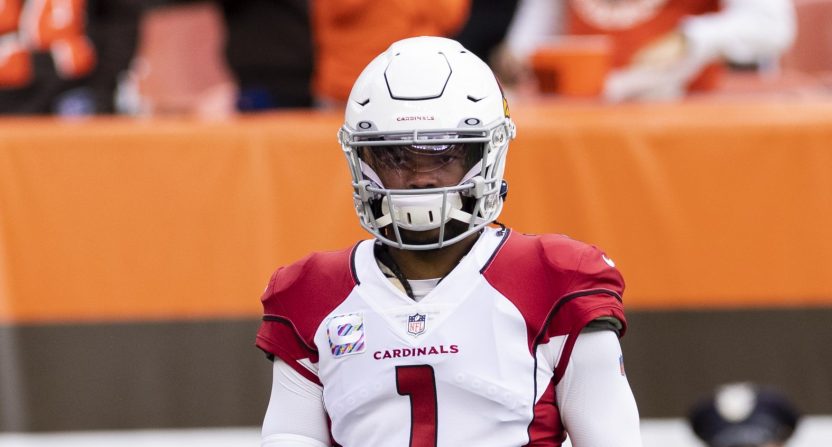 Arizona Cardinals quarterback Kyler Murray has come under fire from one former NFL player who is not impressed with the former Oklahoma quarterback at all.

LeSean McCoy said on a podcast he thinks Murray is overhyped and plays like a high school player, calling him “trash” and “overrated.”

I AM ATHLETE TONIGHT!

“He’s trash. Overhyped, overrated,” McCoy said. “He plays like a high school player. Runs around, runs backwards, does a ballerina circle, goes left, goes right, turns all the way around again, then looks for a wide receiver. He’s trash. That’s not how you play quarterback.”

McCoy played in Kansas City with Patrick Mahomes and says Murray is no Mahomes, not even close.

“He ain’t Mahomes,” McCoy continued to say. “Let me tell you about Mahomes real quick. The majority of Mahomes’ passes are timing. Third step hit, boom, ball’s out. Fifth step, boom, ball’s out. Sometimes he goes off-script because we all can do that. … Not every pass. Every pass, (Murray) is holding the ball, let’s make a miracle. Every game he’s played — watch him play. It’s really embarrassing, to be honest.”

Murray and head coach Kliff Kingsbury has come under fire for Murray’s play. Kingsbury is supposed to be a quarterback guru – one reason he was hired a few years ago – but so far neither he nor Murray has impressed many, including McCoy.

“Who’s coaching this kid? Now when they say we want to sign you to a big contract, but you have to watch certain film, now that makes sense. I see why, because he ain’t reading no coverages. When the quarterback is running around like that all day, all night, all game, that’s because he’s not reading any coverages.”