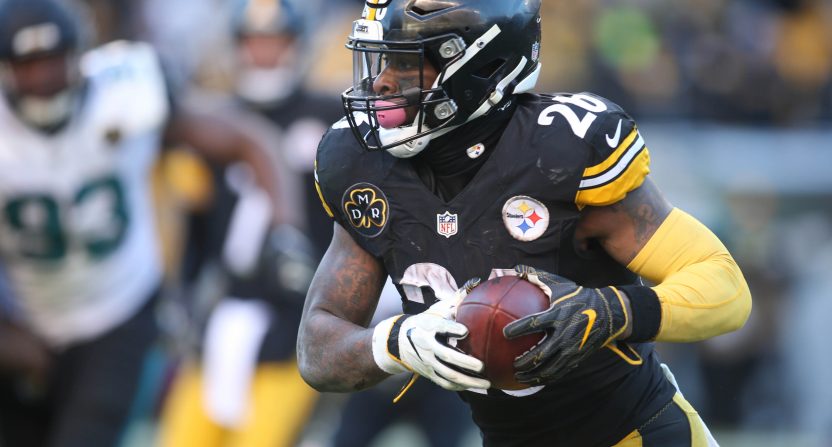 The endless saga of Le’Veon Bell’s holdout with the Pittsburgh Steelers may finally come to an end. Steelers owner Art Rooney II said he expects Bell to be back early next week. That’s all well and good, and maybe the Steelers needed Bell at the start of this season, but James Conner has taken the (metaphorical) dropped ball and run with it to become a breakout star.

Bell’s holdout is not without merit. He has been phenomenal for the Steelers and he deserves to get paid what he feels he deserves. But the Steelers are a team that can put just about any running back in the backfield and get a bunch of yards, so it would be better to sacrifice some quality at running back and use their valuable cap space in other positions.

Jerome Bettis retired in 2006 and ever since then, the Steelers have consistently been one of the top running offenses in the NFL. At the same time, the list of Steelers starting running backs read like a hodgepodge of backups who were put back there, struck gold, and then were never heard from again. Remember these blasts from the past?

Before this year, there are two notable running backs who have had a great career anywhere outside of Pittsburgh. LeGarrette Blount didn’t even spend a full season in Pittsburgh before being released in November 2014 and then immediately signing with the Patriots. In New England, Blount had his career best season in 2016 and has won the last two Super Bowls with the Patriots and Eagles, along with his Super Bowl XLIX win in his first stint with the Pats. Blount is currently playing for the Lions.

DeAngelo Williams came to the Steelers to be a reliable veteran backup to Bell, and when Bell got injured in 2015, Williams had a resurgence that wasn’t seen since his early playing days. Williams ran for 907 yards in 10 starts in 2015, his highest total since breaking 1,000 yards twice in 2008 and 2009. Williams is now a pro wrestler, wrestling in Impact Wrestling (formerly TNA).

Le’Veon Bell is better than any of these running backs and I don’t blame somebody who consistently gets around 2,000 all purpose yards per season wanting a raise from his team. But now Bell has worked himself into a situation where he needs to come back and have a public audition for teams when he eventually becomes a free agent. Bell wanted his workload to be limited to minimize the risk of getting injured, but he also needs to show other teams there hasn’t been a drop off in play.

Bell’s plan would have worked, but the Steelers now have someone who quite honestly made everyone forget about Le’Veon Bell on the field. James Conner, who had 32 attempts and 144 rushing yards in his rookie year, took the reins as starter in 2018 and hasn’t looked back. In just nine games, Conner is already up to 771 rushing yards, 387 receiving yards, and a combined 11 touchdowns. If you have a player who is on pace to get around 2,000 all purpose yards in just his second season, why would you automatically start Bell if and when he does come back? Bell is nice to have for the rest of this season in case there’s an injury, but this is James Conner’s job going forward, and that can’t help Bell’s value.

Just like how the Steelers organization is run like a business, Le’Veon Bell has to run his career as if he’s a business. Bell is trying to get a contract that meets the value he feels he is worth. The average person may not be making millions like an NFL player but we all have had a job where we felt we weren’t getting paid what we deserved. Bell holding out was a risk and he was hoping that the Steelers would need him to make a Super Bowl run. Now, with the emergence of James Conner, Bell overplayed his hand and now needs the Steelers more than the Steelers need Bell. That’s why Bell is expected to be back next week.