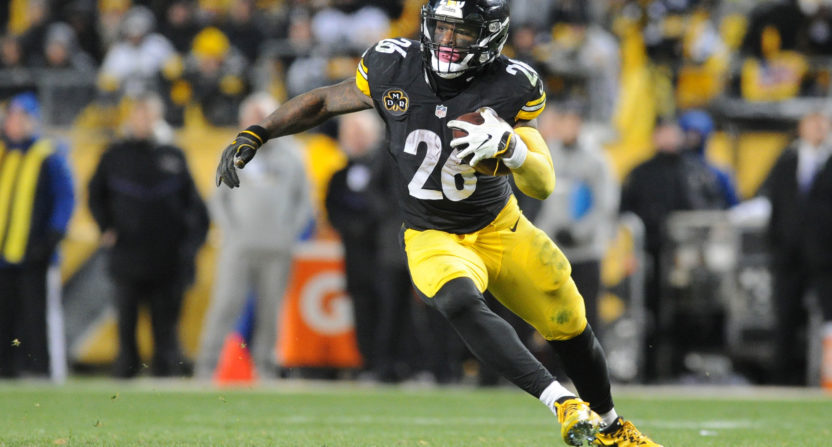 Steelers running back Le’Veon Bell is playing this season under the NFL’s franchise tag, and he is not interested in doing so again next year.

Bell told ESPN’s Jeremy Fowler on Thursday that he would consider sitting out the 2018 season or even retiring altogether if the Steelers used the franchise tag on him once again.

Asked what the Steelers should do this offseason, Bell said simply: “Value me.”

“Just get the numbers straight, exactly where we want them. I’m not going to settle for anything,” Bell said. “I know what I do and what I bring to the table. I’m not going out here getting the ball 400 times if I’m not getting what I feel I’m valued at.”

As for retirement, Bell reportedly said he “hope[s] it doesn’t come to that” but that if he decides to walk away from the Steelers he’ll probably just hang up his cleats.

Bell said he would “probably be done” with football if he did sit out 2018.

Bell’s threat to retire is probably a bluff, but that doesn’t mean he has no right to be exasperated at playing another season under the franchise tag (which pays a player no less than the average of the top five salaries at his position). After being selected in the second round of the 2012 NFL Draft, Bell made less than $1 million in base salary in each of his first four seasons, even as he emerged as one of the NFL’s top running backs.

When he was set to hit free agency last year, the Steelers tagged him, locking him under their control for another year. Given the short career spans of NFL ball-carriers, Bell, who will turn 26 in February, could be running out of chances to truly cash in. Under the franchise tag, he would rank among the NFL’s top-paid backs, but on the open market, he could very well set salary records while gaining some degree of long- or medium-term security.

If Bell continues to insist he won’t play under the franchise tag, the Steelers will have a tough decision to make. They can either call his bluff and tag him anyway, hoping he shows up to camp, or they can let him hit free agency and either pay full price or let him walk away.