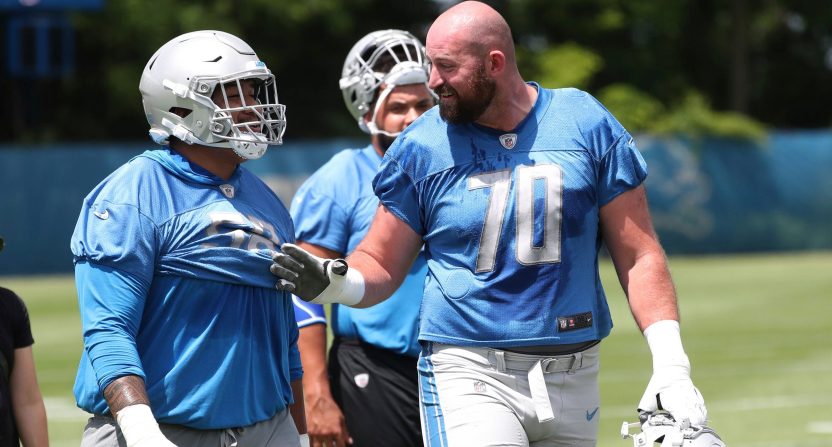 The Detroit Lions came into Sunday’s game against the Washington Commanders in an uncommon position of being favored to win the game, breaking a 24-game streak of being a betting underdog.

When it came time to take the field they did not disappoint, showing an extremely impressive performance on the offensive side of the ball. The effort was good enough for the Lions to come away with a 36-27 victory.

Much of his success was thanks to his offensive line giving Goff time to execute. Following the game, an unheralded offensive lineman was credited for an impressive performance in what was his first NFL start by head coach Dan Campbell.

Offensive tackle Dan Skipper was given an opportunity by Campbell to prove himself by filling in for injured guard Jonah Jackson on Sunday. His efforts were praised by Campbell following the game.

“Hey Skip, nice freaking job!” said Campbell as the rest of Skipper’s teammates took the chance to celebrate this acknowledgment.

This season marks Skipper’s sixth season in the NFL, and Sunday was the first opportunity for him to start a game at the NFL level.

On top of this being his first career start, Skipper is an offensive tackle standing at 6-foot-9, which is often considered too big to be playing guard.

Campbell has been praised for his ability to unite his team despite the results not being there thus far in his coaching tenure. And many in the NFL world clearly saw the video as the sign of a united team and praised Campbell and the Lions.

The Lions team culture is 👌🏻pic.twitter.com/5rwRBjInuY

And if you missed it, this moment from the #Lions locker room will have you tearing up: https://t.co/CIASvzAnOg

who says you can't be romantic about football https://t.co/zW9nnh2smq

As @jflannez19 points out…great moment here! And you can see the satisfaction on his face! So great! https://t.co/wICYFlOcMr

Skipper’s start on Sunday is an awesome underdog story on a team that is overall considered an underdog in the NFL. So this viral video makes for an extremely heartfelt moment that makes many love this Lions team if they didn’t already.