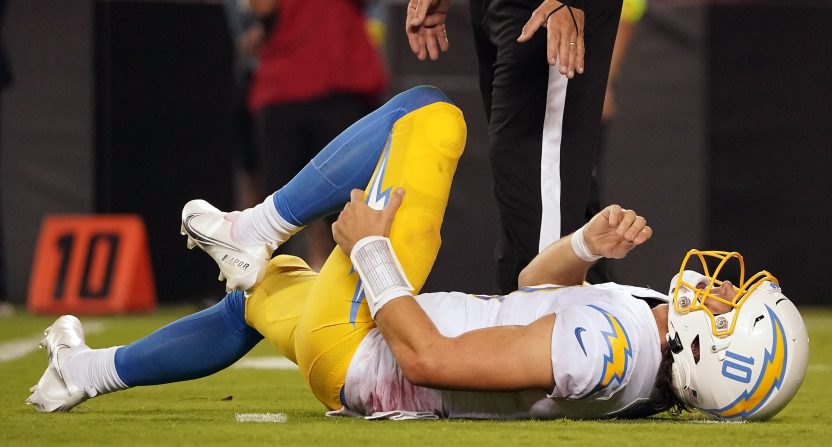 Los Angeles Chargers quarterback Justin Herbert played through injury in the final minutes of Thursday night’s 27-24 loss to the Kansas City Chiefs at Arrowhead Stadium. Herbert took a big hit to the ribs with just over five minutes remaining and was clearly in a lot of pain. He stayed down on the ground for a couple of minutes and was replaced by Chase Daniel at quarterback for one play, but stayed in for the rest of the game.

Chargers QB Justin Herbert was down in pain for a while after taking a big hit.

He was replaced for one play by Chase Daniel, but returned to the game. 🏈 pic.twitter.com/c9KIBVAa26

The injury was clearly impacting Herbert’s play, and he couldn’t even run for an easy first down on 3rd-and-1. Stunningly, he followed that up by throwing an absolute dime, and later threw a touchdown pass on the same drive. On the night, he completed 33-of-48 passes for three touchdowns, one interception, and a 100.5 passer rating.

Justin Herbert — in clear pain — goes from being able to hardly move on one play to throwing an incredible dime on the next. Amazing. 🏈 pic.twitter.com/EDq9AnIyY1

Justin Herbert later threw a touchdown on the drive. pic.twitter.com/cqooAuBFR6

After the game, Herbert went to get x-rays and didn’t speak to the media.

Chargers head coach Brandon Staley told the media that Herbert is “okay,” and he doesn’t expect the injury to be an issue for Herbert going forward. Staley noted that the injury was to Herbert’s abdomen.

Brandon Staley said Justin Herbert is “OK” and doesn’t expect his injury to be an issue going forward. Said he’s dealing with something in his abdomen, possibly ribs.

While head coaches are notoriously vague and resistant to tell the complete truth on injury matters, it would seem unlikely that Staley would say Herbert “is okay” — and that it won’t be a problem going forward — if the x-rays suggested otherwise. Now, Herbert will surely go through further testing in the ensuing days, and perhaps that will reveal an issue the Chargers currently aren’t aware of. But for now, this is a very encouraging update for the Chargers and their fans.

Herbert, 24, is only in his third NFL season, but he’s already a superstar — with the upside to get much better — and one of the best quarterbacks in the league. In his sophomore campaign, he threw 38 touchdown passes and led the Chargers to a 9-8 record.

And now, the Chargers figure to be an annual Super Bowl contender with Herbert at quarterback- as long as he can stay healthy.

The good news for Herbert and the Chargers is that they won’t play again until Sept. 25, in a home game against the Jacksonville Jaguars. So, as long as Herbert didn’t suffer a serious injury, he’ll get plenty of time to heal up before the Chargers’ next game.

Update: On Friday, Brandon Staley announced that Justin Herbert has fractured rib cartilage and is “day-to-day.”

Herbert still should have a good chance to play in Week 3, but this will of course be a situation to monitor in the coming days.