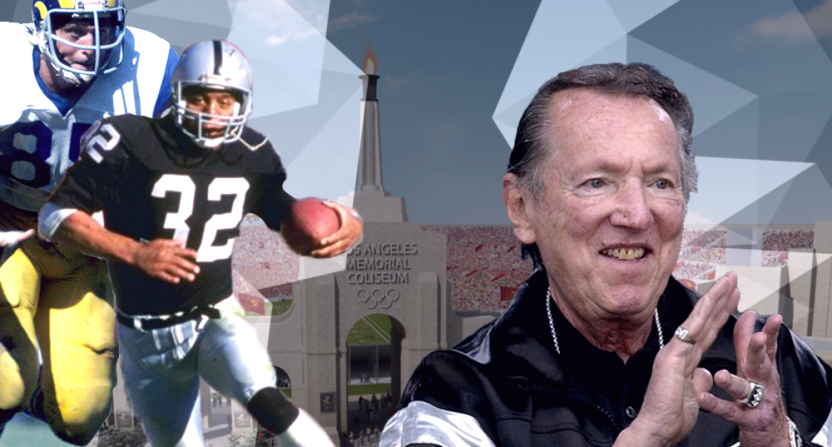 For years, one of the strangest quirks about the NFL was that it didn’t have a franchise in Los Angeles, the second-biggest media market in the nation. The fact that LA was, for the most part, fine with that only added to the weirdness. Unlike most other cities of its size, LA had a prize college football team (USC) to fill the void, so they were more than happy to keep their focus on the Trojans, Lakers, and Dodgers rather than worry about whether or not the NFL finally came calling.

The St. Louis Rams became (once again) the LA Rams and the San Diego Chargers became (once again) the LA Chargers. While the merits of having two NFL franchises in a metropolitan area that was doing just fine with none will continue to be debated in the coming years, the Rams have already done something that so few Los Angeles pro football franchises before were able to do. They made it to the Super Bowl.

Even though there were no LA football teams between 1995 and 2016, Los Angeles had two NFL franchises for many years prior. Before they returned from a brief stint in St. Louis, the Rams played in the Los Angeles area between 1946 and 1994. Technically they left LA in 1980 and moved to Anaheim, keeping the city moniker. The Oakland (soon to be Las Vegas) Raiders decided to fill that space, calling LA home between 1982 and 1994.

Despite having two franchises call the city home at different points for much of the Super Bowl era, the Rams’ appearance in Super Bowl LIII is the only the third-ever by a franchise in LA (we’re not counting Super Bowl appearances that took place elsewhere. Sorry, Chargers). And both of those others times also revolved around teams that had either recently moved to or were about to move from Los Angeles.

The first time a team from Los Angeles made the Super Bowl was in the finale of the 1979 season. That was good news for the Rams. The bad news was that they were facing the team that everyone equated with NFL dynasty before the New England Patriots’ current run: The Pittsburgh Steelers.

As the first 9-7 team to make the Super Bowl, the Rams were huge underdogs coming into the game despite the fact that they were playing in the Rose Bowl. They actually took a 13-10 lead into halftime but Steelers quarterback Terry Bradshaw, wide receivers Lynn Swann and John Stallworth, and running back Franco Harris put it all together to pull away in the fourth quarter for their fourth title in six years.

LA fans had gotten a taste of the Super Bowl but it was tinged with sadness as the Rams left the LA Coliseum for Anaheim Stadium the next season. Unhappy with the league’s blackout rules over non-sellout games, ownership wanted the team to play in a smaller stadium in order to ensure sellouts. The Rams were also following migration patterns of the day as more people flocked out of the big city to Orange County with them. Long before the Los Angeles Angels of Anaheim, the Rams started the trend of claiming LA without actually being in LA.

As the Rams left town, Oakland Raiders owner Al Davis saw an opportunity. He was trying to get improvements made to Oakland–Alameda County Coliseum but was running up against a lot of walls. So, he decided to move the team to LA, a decision that was met with a resounding “no” by the other NFL owners. Al Davis and the LA Coliseum then filed an antitrust lawsuit against the NFL and won, clearing the way for the team to move in 1982.

At this time, the Raiders were also one of the marquee franchises in the league. They’d won their first Super Bowl in the 1976 seasons and their second championship in the 1980 season. They looked like they were en route to another one in the strike-shortened 1981 season, their first in Los Angeles, but they were defeated in the playoffs. However, the team finished the 1983 season with a 12-4 record and met the defending champion Washington Redskins in the Super Bowl.

Despite the fact that Washington was favored, the game is remembered as “Black Sunday” for the way the Raiders absolutely dominated the day. Marcus Allen rushed for 191 yards and two touchdowns en route to a Super Bowl MVP performance.

It must have been strange to be an LA football fan. To watch one franchise win a Super Bowl here and then immediately leave, only for another franchise to show up and win their own Super Bowl a couple years later. And then…nothing.

The Raiders faded into the pack in the years ahead, briefly surging to the AFC Championship game in 1990 but falling short. They’d return to the Super Bowl in 2002 but that was after they’d left to return to Oakland.

As for the Rams, they went to the NFC Championship in 1985 and 1989 but ran into juggernauts both times. It wasn’t until they left for St. Louis that they’d return to the Super Bowl.

Now, the Rams are back and they’re back in the Super Bowl. In theory, with a state-of-the-art stadium going up in Inglewood, they’ll be here for a long time to come (the Chargers, too). Perhaps one of them will be able to string together multiple Super Bowls in a short amount of time so that the people of LA get to know what it’s like to see sustained success across a singular franchise.