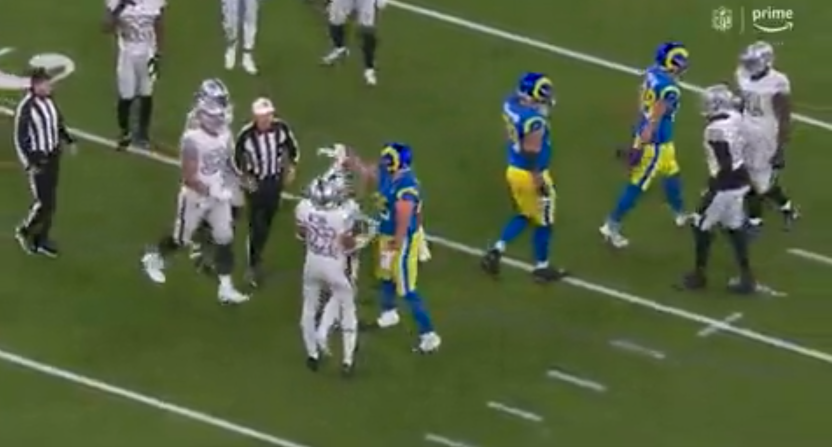 Until their final two drives, offense was hard to come by for the Los Angeles Rams in their matchup on Thursday against the Las Vegas Raiders. A boneheaded penalty by the Rams made things even more difficult and came back to bite them in a big way.

The play occurred in the third quarter with the Rams facing a 13-3 deficit. Rams quarterback Baker Mayfield was able to complete a third-down pass to tight end Brycen Hopkins to set up a manageable 46-yard field goal attempt.

However, Rams center Connor Shelton made an awful mistake following the play, getting called for a personal foul penalty for a swipe at a Raiders player’s head.

OK Google: Why are the Rams 3-9? pic.twitter.com/dwvV2NzuAv

This penalty certainly made the field goal attempt much more difficult for Rams kicker Matt Gay, and he would go on to miss the 61-yard attempt.

Fans took to social media to blast Shelton for this mistake that ended up potentially costing the Rams three very valuable points in this low-scoring affair.

The Rams went from Super Bowl champion with a QB bolstering his Hall of Fame resume, an absolute legend leading the defense and a head coach labeled an innovator…to a really banged up team that makes incredibly boneheaded mistakes constantly.

The NFL is a humbling league.

That’s not on the refs at all. Players have to learn to walk away and not allow other players to get into your head. That’s solely on the Rams #65.

Honestly that’s a smart penalty by Shelton of the Rams. Can’t afford to keep this game close and end up winning. That jeopardizes a good draft spot for Detroit.

This certainly did not help a Rams offense that was already struggling in Baker Mayfield’s debut with the team, which is to be expected considering his limited knowledge of the playbook.

The mistake sums up the season for the Los Angeles Rams to this point, and this year’s team is unquestionably a far cry from last year’s team that ended up winning the Super Bowl.