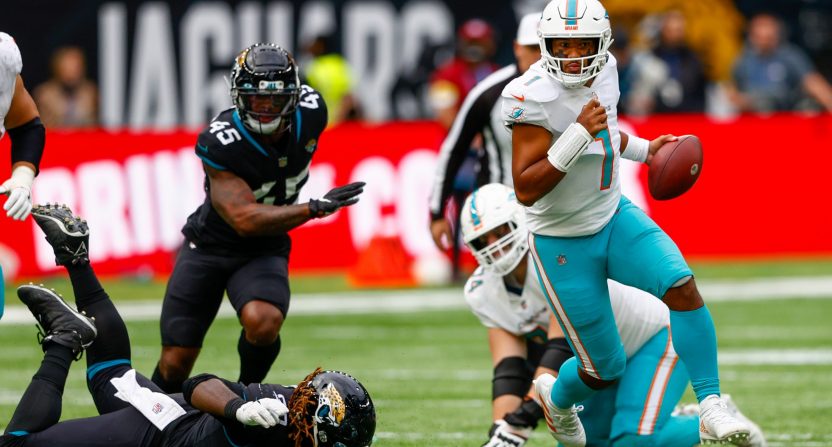 There are multiple reports out right now that the Houston Texans could be very close to completing a trade involving the Miami Dolphins that would send embattled quarterback Deshaun Watson to South Florida. The Dolphins have long been considered a destination for Watson, who hasn’t played since last season and is currently facing over 20 civil suits related to allegations of sexual assault.

If the trade happens, it will likely be the end of the Tua Tagovailoa era in Miami, despite the fact that the former Alabama quarterback is in the midst of his second season with the team and is trying to make the best of a tough situation for any young quarterback. Tagovailoa has also been dealing with injuries this season, which have limited his ability to play at a high level.

While you could make the case that Tagovailoa still has a lot of learning and growing to do as an NFL quarterback, it feels a bit early for the franchise to give up on him, especially when they have so many other areas in need to improve to support the position. And while people are quick to compare Tua to Justin Herbert, who was drafted after him by the Chargers and is finding much more success, it’s clear that those situations are different.

But that doesn’t appear to be a concern for owner Stephen Ross, who simply wants the shiniest toy available (even if he might not be able to have that toy even after he makes the trade).

ESPN’s Louis Riddick doesn’t see how all of this makes sense for the Dolphins or anyone else who is trying to trade for Watson. He also doesn’t see why the Dolphins aren’t putting the focus on better supporting Tua and surrounding him with better mentors and talent.

My GM @LRiddickESPN has spoken on the DeShaun Watson rumors and Miami setting Tua Tagovailoa up for failure.

You folks know how I feel about Riddick. pic.twitter.com/ALe80eUmh0

“I don’t see how right now it makes any sense for the acquiring team to go ahead and negotiate a trade for a player who you have no idea when he’s going to be available. You have none. That just seems grossly irresponsible for me.

“Since we’re talking about Miami, in particular, as far as Tua is concerned, I don’t know how you pull the plug on a player right that, when you compare him, let’s just say to a guy like Justin Herbert. The situations have been totally different… Number one, Herbert’s been healthy. Tua has not been healthy. You look at Herbert’s situation, he’s had great mentors in the early part of his career…a guy like Herbert has had great weapons, in guys like Mike Williams and Keenan Allen.

“Tua has had none of that. He hasn’t had the help. He hasn’t had the mentors. He hasn’t been in the kind of offensive system that would lead to him having the kind of success that Justin Herbert has had. And so right now, I just don’t know how you are able to make a true definitive declaration as to what he is, as far as his prospects in the NFL when you haven’t really set the table for him.

“I understand the fascination with Deshaun because of his ability and what he has proven on the field when he has been on the field. But as far as Tua is concerned, he has not been set up for success to this point. And if you are lucky enough to get a hold of a young man like this because Miami does what they want to do at the quarterback position…I would be definitely looking into doing that and then trying to set the table for this young man because the deck has been stacked against him.”

We’ll see if the Dolphins do decide to move on from Tua for the chance that Watson will be able to play for them, although it’s entirely possible the deal blows up in their face and they end up with neither quarterback being available to them. Quite a strange situation, especially when you consider the Dolphins could try to focus on building a better football team around Tua instead.