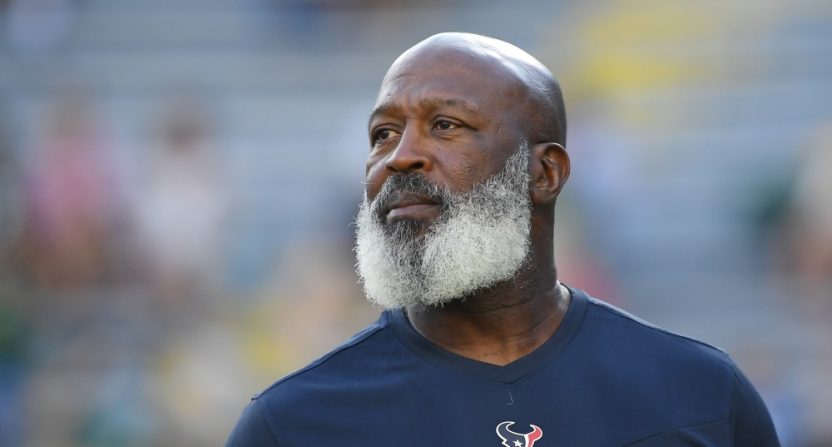 The NFL world was shocked when it was revealed that Houston Texans rookie receiver John Metchie III was diagnosed with acute promyelocytic leukemia.

This type of leukemia is the most curable form, but regardless, it is an extremely saddening diagnosis for a player with a ton of potential like Metchie seems to have after being taken in the second round of the 2022 NFL Draft by the Texans.

He will likely miss the entirety of the 2022 NFL season as he undergoes treatment, but Texans head coach Lovie Smith made a touching gesture to remind Metchie that the organization is fully behind him.

“I normally start off the first meeting addressing our football team. This year, we let John Metchie do it,” Smith said via NFL.com on Friday. “There were a lot of questions on what’s going on with his health, so I let him talk to the football team and let them know what he has in store this year and how it would affect our football team.

“All I can say about that is we have a family member fighting something serious and we’re going to be there every step of the way with him. Eventually, he will get back out there with our football team and we can’t wait for that.”

NFL players likely don’t need all that much motivation to win football games, but knowing that they have a player going through some serious medical issues reportedly had a profound impact on the team.

Lovie Smith had John Metchie III, the rookie WR from Alabama, address the team and explain his Leukemia diagnosis. Metchie's speech seemed to have a profound on his new teammates.

We have seen instances where this type of situation has inspired a football team, such as former Indianapolis Colts head coach Chuck Pagano’s cancer diagnosis in 2012 when the Colts made the playoffs. The mantra “Chuck Strong” was a prevalent message around the team that season.

It remains to be seen what kind of impact this will have with the Texans this season, but it is great to see that he has the support of the organization while he goes through his cancer treatment.