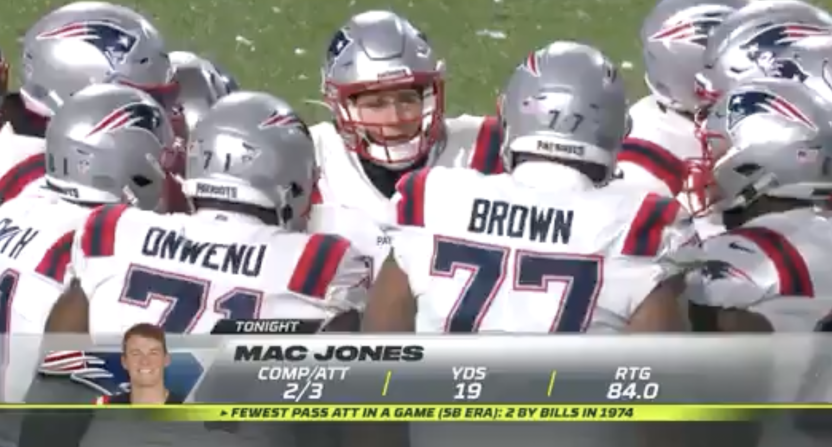 The New England Patriots defeated the Buffalo Bills 14-10 on Monday night, and they did so in spite of their passing game.

New England quarterback Mac Jones had a historic evening but not for any good reasons. Thanks to some very windy weather, Jones finished the night with two completions on just three pass attempts for 19 yards. It’s the second-fewest passes attempted in an NFL game since the 1970 merger.

His three pass attempts are the second-fewest attempts by a team in a game since the 1970 merger. pic.twitter.com/aTWO7Yj6VB

The Patriots won tonight completing 2 of 3 passes for 19 yards. The 2 pass completions are tied for their fewest in a single game in franchise history.

The three pass attempts are the fewest in a single game in franchise history. pic.twitter.com/RQAz85UXLY

The Patriots are also the first team to actually win a game since 1974 despite having three or fewer passing attempts.

The Patriots only attempted THREE PASSES and still beat the Bills ⬇️

They’re the first team since 1974 to win an NFL game attempting 3 or fewer passes 😳pic.twitter.com/rkXLW8SsbC

Jones actually only had one attempt and completion in the first half, and it seemed like he might finish the game that way until very late in the fourth quarter when the Patriots passing attack came alive…for two attempts.

If you were hoping to see Mac Jones only complete one pass the entire night, blame Joe Buck. #ManningCast pic.twitter.com/5gm1il0O23

There’s been a lot of talk about how Jones has succeeded by doing what’s asking of him during his rookie year and tonight might have been the perfect example. It’s hard to screw up too much when you’re only asked to attempt three passes in one game. Many folks about thrown comparisons around between Jones and other elite quarterbacks and, well, maybe this game will cool some jets for a while.

In the meantime, there were plenty of jokes to be made about Jones and his passing game, or lack thereof, on Monday night.

Mac Jones has done it twice in one year

Mac Jones, with two minutes remaining in the third quarter and the No. 1 seed in the AFC on the line, has more runs than passes, and people say he's not a dual-threat QB.

I would drive a golf cart into a pond https://t.co/V4RqCBNkje

No wonder the Patriots don’t want anyone talking to Mac. They’re wrapping him in as much protection as they possibly can. And hey, they won the game, so who are we to judge?