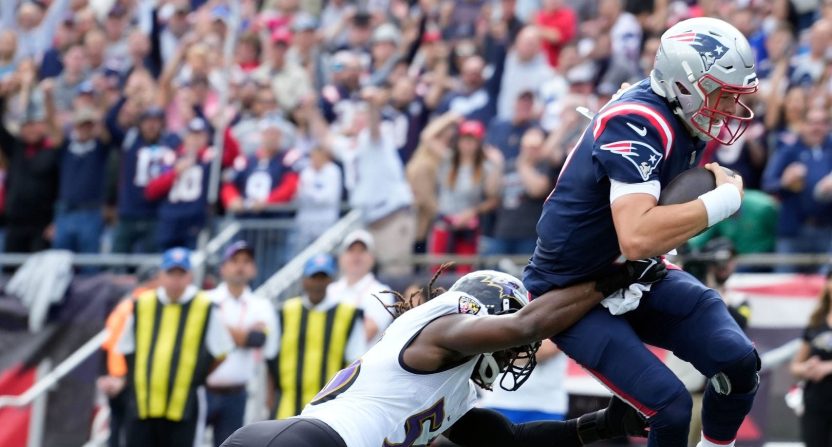 The first three weeks of the 2022 season haven’t gone especially well for the New England Patriots. New England fell to 1-2 on Sunday losing 37-26 to the Baltimore Ravens. When the game was over, it was revealed that second-year quarterback Mac Jones is dealing with another injury.

Adam Schefter of ESPN reported that Jones “is believed to have suffered a high-ankle sprain” against Baltimore. The severity of the injury will be known after an MRI on Monday.

Patriots’ QB Mac Jones is believed to have suffered a high-ankle sprain during today’s loss to the Baltimore Ravens, per source. He will undergo an MRI on Monday to confirm the diagnosis and determine the severity of the injury.

In a vacuum, this would be bad news for Jones and the Patriots. Outside of a vacuum, it’s even worse. Jones’ status for Week 2’s win over the Pittsburgh Steelers was in doubt throughout the week, thanks to a back injury and an illness. Now he has another, completely unrelated injury.

The general feeling in the football world was that Jones will miss at least some time.

Sounds like a good chance we see Brian Hoyer next Sunday in Green Bay. https://t.co/hAAOt3pfoa

The Patriots are likely going to be without Mac Jones for — at least — a few games. https://t.co/szohufhtxA

The job will not be any easier for New England and whichever quarterback goes under center next week. The Patriots will host the Green Bay Packers in Week 4. After losing the opener, the Packers have won two straight. In Week 3, Green Bay defeated the Tampa Bay Buccaneers, led by New England’s former quarterback, Tom Brady, holding Brady and the Buccaneers to only 12 points.

Through the season’s first three games, Jones has completed 67.2% of his passes for 786 yards. He has two touchdowns, five interceptions and a 76.2 passer rating. Jones threw for a season-high 321 yards on Sunday but had no touchdown passes and three interceptions.