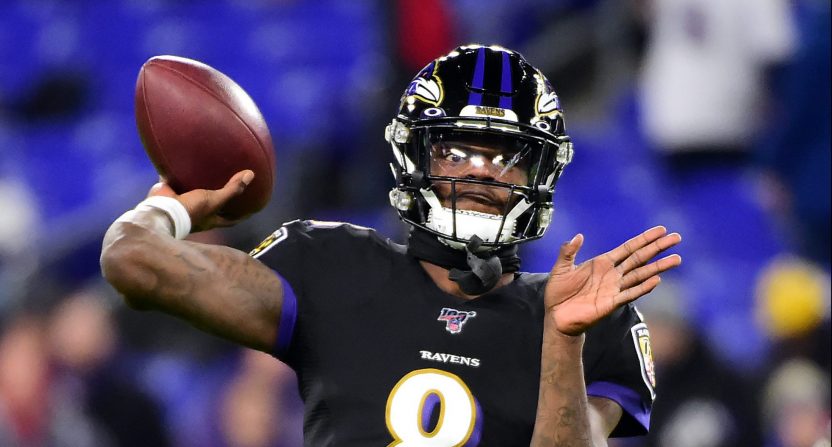 Video game production has been up in the air right now so who knows if the new Madden game will be ready by its traditional August release date. Nevertheless, it probably makes sense for EA Sports to prepare as though the game will be released in August.

Lamar says he'll be on the cover of Madden: pic.twitter.com/bPtzFBIlVI

"It's a dream come true." @Lj_era8 on Madden cover: pic.twitter.com/FtNibi7xt4

EA Sports seemed less than thrilled about that reveal but the cat’s out of the bag and the reigning MVP is an obvious choice to grace the next cover.

By being on the cover of Madden, that naturally brings up questions about the “Madden Curse.” Jackson said he’s “not worried” about the curse and he’s got a point considering last year’s cover athlete won the Super Bowl. But not everyone is as lucky as Patrick Mahomes and some cover athletes have had bad seasons the year they were on the cover. Here’s a look at cover athletes from the past 10 years and how they fared that season to see if Jackson should be worried about taking this honor.

Antonio Brown – Madden NFL 19 (2018): Started 15 games, 104 receptions for 1,297 yards and a career high 15 touchdowns. Steelers finished 9-6-1 and missed the playoffs as Brown would only play one more game in his career so far after being released by the Patriots due to allegations of sexual assault.

Rob Gronkowski – Madden NFL 17 (2016): Started 6 games, 25 receptions for 540 yards and 3 touchdowns. Started the season with an injured hamstring and had to miss the rest of the season for surgery on a herniated disk but the Patriots won Super Bowl LI.

Peyton Hillis – Madden NFL 12 (2011): Started 9 games, 587 rushing yards and 3 touchdowns with 130 receiving yards. Injuries and an ugly contract dispute with the Browns sent him to Kansas City at the end of that season and he eventually retired in 2015.

Drew Brees – Madden NFL 11 (2010): Started 16 games, threw for 5,476 yards and 46 touchdowns (both career highs) with 14 interceptions. Was named AP NFL Offensive Player of the Year as the Saints lost in the Divisional round.

So as you can see, the “Madden Curse” doesn’t exactly hold much weight in recent history. Sure, not every season ended well but  four of the previous six cover athletes were in the Super Bowl that year, with only one player suffering a serious injuries that kept him out for most of the season.

The odds look good for Lamar Jackson and if you were to tell him he has a 40 percent chance of making the Super Bowl by being on the Madden cover, he’s going to take that. So looking at the recent history of Madden cover athletes, Jackson’s right, he shouldn’t be worried about any curses.