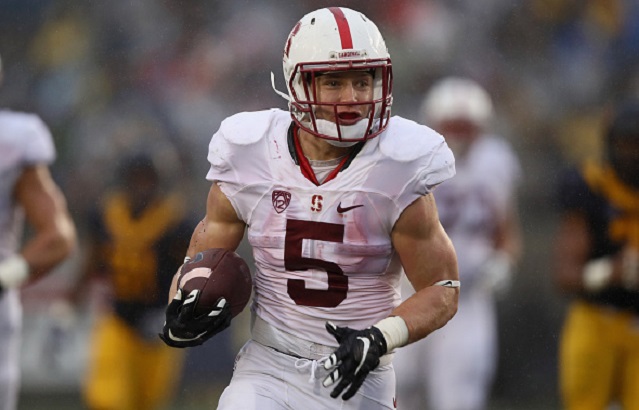 After what seems like an eternity of waiting from the combine until late April, the NFL Draft is just about… finally… almost… here. This year’s draft represents a class that has a bit more intrigue than usual because of the star college players available up and down the board, the possible trades, and the lack of elite quarterback prospects that could shake up the first round.

One of the names that will be closely watched is Stanford’s electric multi-threat offensive juggernaut Christian McCaffrey. The dynamic running back was a star in college with his ability to catch the ball out of the backfield and be a game-breaking return man. All of those skills were on display when he set the Rose Bowl record with 368 all purpose yards against Iowa a couple of years ago.

At first, McCaffrey’s future in the NFL approaching the draft seemed to have a couple of question marks due to his size and durability. He was labeled as a “potential first round pick.” However, as the draft process has gone on, McCaffrey’s stock has been rising and rising to the point where it’s been rumored he could be gone in the Top 10 or Top 15.

Now come a couple more interesting developments. First, Pro Football Talk reports McCaffrey has canceled his private workouts with teams, a sign that he certainly feels secure about where he will be picked in the upcoming draft. Second, DraftAnalayst.com reports that McCaffrey has a guarantee from a team selecting in the teens that they will select him if he is available.

That second item is really noteworthy because it’s much more common to hear of a “draft guarantee” in the NBA Draft than it is the NFL Draft. In fact, I can’t recall (outside of a team drafting #1 overall of course) a time where a specific team would guarantee to a specific player that they would be the selection if available.

The reasons are many. First, the draft always carries waves of unpredictability with it where players rise and fall. It could be that the one prized player you thought was out of reach could fall into your laps when you never expected it because two players were reaches and another team traded up for a quarterback. Let’s just say for example that the team that guaranteed McCaffrey is the Saints (just to envision the tantalizing prospect of him in an offense with Drew Brees and Sean Payton as their new Darren Sproles or Reggie Bush for a moment) for hypothetical purposes. What if Malik Hooker or Marshon Lattimore then take a tumble down the draft board to #11? Surely the Saints would say to McCaffrey “Sorry about your luck but we never thought in a million years we’d get this guy!”

Why make that guarantee and take the surprise developments of draft night off the table? And if a team goes back on it and selects someone else, you can bet it wouldn’t reflect well on them with new draftees or potential free agents.

Moreover, the NFL is notorious for smoke screens and false information in the lead up to the draft… like the Browns considering taking Leonard Fournette at #1 overall instead of Myles Garrett. If that happens I’ll recruit someone to swim across Lake Erie on my behalf. (You think I’m putting myself on the line like that? Please.) For a team to make their intentions so brazenly known would run counter-intuitive to everything we know about the draft process. If the league catches wind that a team has “guaranteed” McCaffrey in the teams, it might as well be a written invitation for another club who really wants him to move up ahead of them in the draft and select him.

Could there be a guarantee out there? It’s possible, but it’d also be a dangerous game to play for any NFL franchise. But whether he has it in stone or not it appears that the Stanford running back is very confident about his status in the upcoming draft.