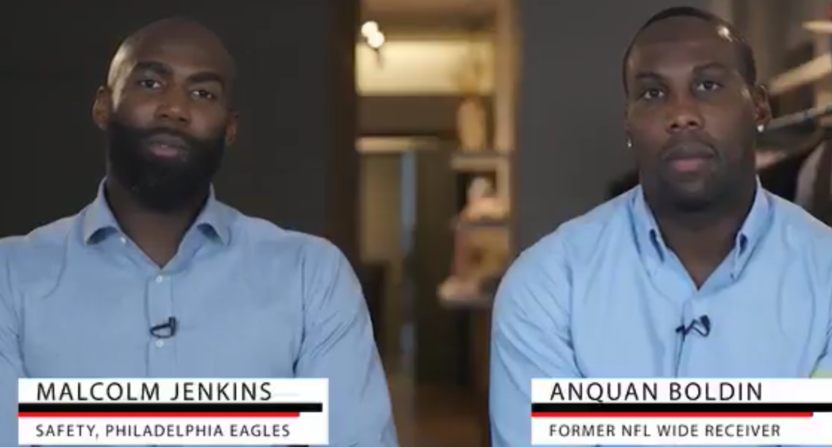 Even if Colin Kaepernick isn’t suiting up for an NFL team this season, the national anthem protests that he started last season have been picked up and carried forward by multiple NFL players during the 2017 preseason. All signs point to those protests continuing during the season, especially as stories such as the one Seahawks defensive end Michael Bennett shared about being a victim of police brutality continue to happen.

While some in the media and NFL front offices want to dampen or quiet the protests, participating players want fans to understand why they’re happening in the first place.

Philadelphia Eagles safety Malcolm Jenkins and retired NFL wide receiver Anquan Boldin posted a video on Wednesday via The MMQB in order to explain the motivations behind the protests and demonstrations.

“One of the many things that make our country great is that it was founded on the idea of justice for all,” said Bolden. “And we feel that it’s our responsibility to take a stand against the injustices that we see happening in America right now.”

The duo ties together the NFL protests occurring on the field with specific actions that players are attempting to take off the field. They specifically mention that they want to end the money-bail system, which unjustly punishes the poor. They also want to pass Clean Slate legislation in Pennsylvania, which would seal non-violent misdemeanor records after 10 years in order to give people a fresh start so long as they stay out of legal trouble. They also discuss the need for more police accountability so that trust can be rebuilt in local communities.

The duo also spoke with MMQB about their why the protests are so important for raising awareness about a multitude of issues. Jenkins talked about how he’d love to be doing something else with his time but knows he can’t.

We would rather not be demonstrating or protesting. The only reason that we feel it necessary is that guys have been doing work on their own in these areas, whether it be racial justice, social justice, criminal justice reform or civil rights. Athletes have been doing this work for a long time. We just don’t hear about it, and it doesn’t get the same kind of hype. That’s where these demonstrations are useful, because regardless of how you feel about them, they keep that conversation going. Guys have gone back and forth as to if it is effective or not, or if it’s a distraction, but there is the awful truth that if we just go and do the work silently, it doesn’t get the attention that it needs. So whether you think it is a protest or a demonstration, really, it doesn’t matter. As long as we are keeping these conversations going long enough to redirect some of that attention to the work, to the actual call to action, it’s worth it.

Boldin also explained why he didn’t participate in the national anthem protest as a player.

The reason I didn’t [participate in an anthem demonstration] was seeing the way people took that and ran with it and never talked about the issues. I didn’t want to give people an excuse to not deal with the issues that we are dealing with. Because when people brought it up, the only thing they wanted to say was, Well, you are disrespecting the anthem, you are disrespecting the flag. But they never wanted to talk about why guys were taking a knee, why guys were raising a fist. And for me, that’s the message that I wanted to get out. This is why guys are protesting, this is why guys are taking a knee, or whatever guys are doing, this is why. I never wanted that message to get lost.

Where the protests go from here remains to be seen but it’s clear that people like Jenkins and Boldin are going to make sure things are just getting started, whether the NFL likes it or not.