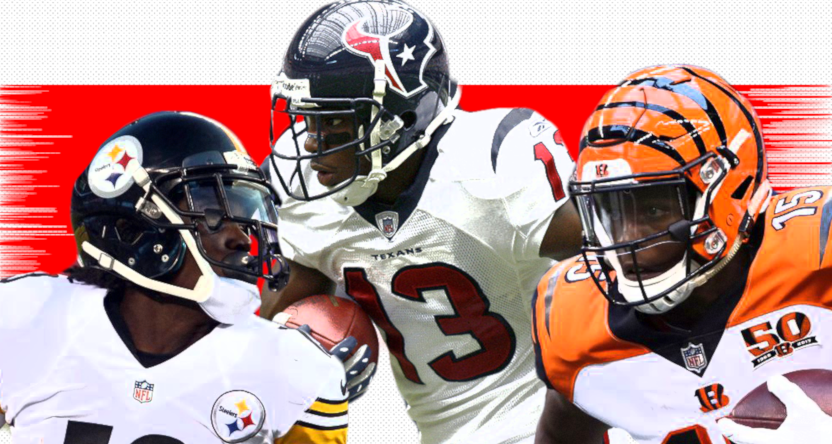 It’s not hyperbole to say that millions of dollars are on the line at the NFL Combine in Indianapolis. We see it every year where draft stocks can see a meteoric rise or a precipitous fall based upon how potential draftees perform and measure out at the combine. Just this week NFL analysts went into hype overload based on Kyler Murray’s height and hand size, and Ole Miss WR D.K. Metcalf became a household name almost overnight based on his insane measurables.

But big stats at the combine don’t always mean big careers in the NFL. Specifically when it comes to the combine’s marquee event, the 40-yard-dash. While listening to local talk radio this morning in Columbus, former Ohio State linebacker James Laurinaitis laid out the surprising number of NFL Combine stars who flamed out in the NFL. In fact, out of the Top 10 fastest 40 yard dash times in NFL combine history, you may be able to only remember a couple of them even if you are a hardcore football fan. Here’s the list of the Top 10 40 yard dash times at the NFL Combine and what happened to them in the professional ranks.

Ford was a football and track star at Clemson and was drafted by the Oakland Raiders in the fourth round, because who else is going to draft a speedy wide receiver, right? His career got off to a great start in his rookie campaign with seven total touchdowns as a runner, receiver, and kick returner. However, that rookie season was Ford’s peak. After suffering an ankle injury in November 2011, Ford missed the entire 2012 season and made just 13 catches in 2013 before his NFL career came to a premature end.

Nelson is still in the league with the team that drafted him, the Arizona Cardinals. After being selected in the fifth round of the 2015 draft Nelson has played four seasons and scored 11 touchdowns. Most notably, he was named NFC Offensive Player of the Week for Week 2 in 2017. Time will tell just how long he remains in Arizona, though, as he set career lows in 2018 in every statistical category and only caught seven balls all season.

Unfortunately for Myrick, his NFL career to this point has lasted just two games after being drafted by the Jacksonville Jaguars in the seventh round of the 2017 NFL Draft. After being waived by Jacksonville, Myrick has spent the last year on and off the practice squad of the Minnesota Vikings.

Calico’s combine time shot him up draft boards, and he went 60th overall in the second round to the Tennessee Titans. Calico caught 4 TDs in his rookie season in 2003, but alas, those would be the only touchdowns of his career. He played in one game in 2004 and 12 games in 2005 before he was out of the league for good. Unfortunately, he might be most known for suffering an injury at the hands of a Roy Williams horse collar tackle during a 2004 preseason game which helped usher in the rule still in use today.

Routt had by far the best career of anyone on the list to date. After being drafted #38 overall by (you guessed it) the Raiders, he played seven seasons for the team highlighted by 12 INTs and one return touchdown. In 2012, he signed a three-year contract with the Kansas City Chiefs but was later cut from the team in November of that year.

How good of an athlete is Goodwin? He made the 2016 US Olympic team in the long jump event and finished in 10th place. Although drafted by the Bills in the third round in 2013, his career blossomed in San Francisco with the 49ers. In his first year in San Francisco, Goodwin notched a career high 962 receiving yards, eclipsing his career total through four seasons in Buffalo. Goodwin battled injuries throughout much of 2018, but if he and his quarterback Jimmy Garoppolo can get healthy, hopefully even better numbers are on the horizon.

Like a few others on the list, Mathis’ career was full of bright flashes of potential before injuries took their toll. He was named to the Pro Bowl as a rookie return man for the Houston Texans after being drafted in Round 4 in 2005. Sadly, he was injured in that Pro Bowl, fracturing his foot in the exhibition game. Mathis was placed on injured reserve in each of the next two seasons, effectively ending his NFL career.

Archer earned All-American honors as a do-it-all running back at Kent State. In 2012 he put up 23 touchdowns for the Golden Flashes as a runner, receiver, and returner, exceeding 2,500 yards. After being drafted in Round 3 by the Pittsburgh Steelers, Archer could not translate that success to the NFL. Archer lasted just two seasons in Pittsburgh and racked up a total of 63 combined yards from scrimmage in his NFL career.

Finally! The only multi-time Pro Bowler on this list is by far the most successful 40-yard-dash star in the NFL and one of the best running backs of his era. Johnson was a 1,000-yard rusher in each of his first six seasons in the league with the Tennessee Titans. In 2009, he became only one of six running backs in the history of the league to post a 2,000-yard season. He was equally as effective in the passing game as well, setting the NFL record that season with most yards from scrimmage (2,509) that still stands today. Like most running backs in the modern age, Johnson couldn’t keep up that production into his 30s, but don’t let that take away from the fact that he was one of the most electric players the league has ever seen in his prime.

Ross was already a top wide receiver prospect entering the 2017 NFL Draft, and his record combine time shot him up into the Top 10 where he was selected #9 overall by the Cincinnati Bengals. While he was the highest draftee on this list and had the fastest posted time, Ross’ career has been slow to get out of the gates. Ross was a healthy scratch for most of his rookie season with the Bengals. Last season he improved, catching 21 passes and 7 TDs. It doesn’t seem to be enough progress for the Bengals, though, as they are reportedly looking to trade him this offseason.