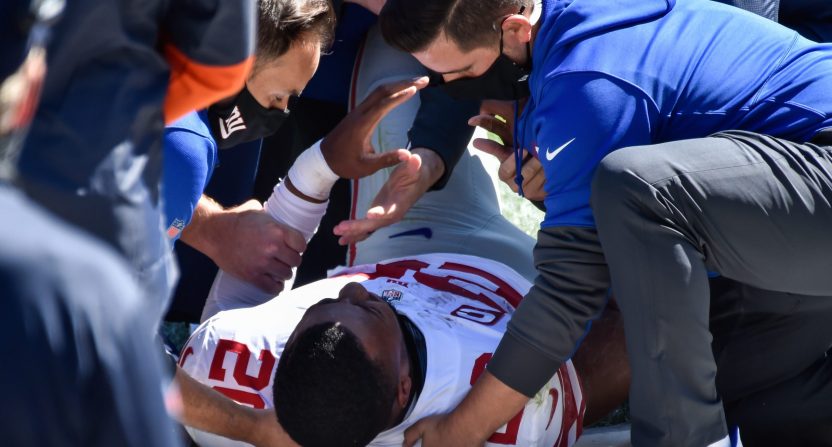 In just the first hour of the early Sunday NFL games, a lot of top players were injured throughout the NFL.

The San Francisco 49ers had two top defenders injured in consecutive plays. Defensive rookie of the year Nick Bosa and defensive tackle Solomon Thomas both had to be carted off the field after picking up knee injuries. The 49ers have ruled both players out.

After no starting quarterback was injured in Week 1, that unfortunately wasn’t the case in Week 2. Denver Broncos quarterback Drew Lock injured his right shoulder and after going into the medical tent, he was ruled out by the team. First round draft pick Jerry Jeudy was also injured but fortunately for him, he is probable to return.

The Colts had high hopes for wide receiver Parris Campbell after injuries derailed his rookie season. Unfortunately, Campbell had to be carted off with a knee injury and the team has him listed questionable for now.

Anthony Barr of the Vikings got a shoulder injury and is doubtful to return according to the team.

But the injury that’ll garner most attention is Giants running back Saquon Barkley. Barkley had two different injuries on consecutive plays and it was the second that kept him out of the game. Barkley first went down with some type of injury to his arm but the most serious involved him immediately grabbing his knee on the second play and was carted off. Barkley was ruled out while he underwent x-rays to figure out the extent of his injury. The Giants revealed that he’ll “undergo further evaluation tomorrow.”

The Saquon Barkley injury. Looks to be a right knee.pic.twitter.com/XfhQxEiyaa

Hopefully all these players get back on the field as soon as possible. Football is a very physical game and injuries happen but it’s astounding that so many people got injured in such a short period of time.

UPDATE: Jimmy Garoppolo, who was limping throughout the first half, has been ruled out along with running back Raheem Mostert. The 49ers have been dismantled by injuries already and things are just getting worse.