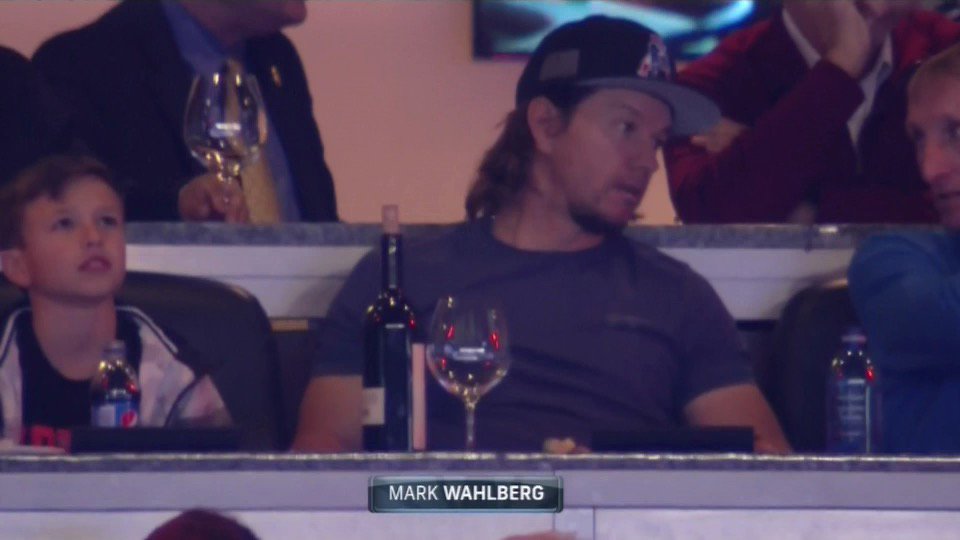 When one watches an NFL game on TV, it seems as if every other commercial is for beer. Rarely if ever does one witness a wine commercial during an NFL game.

While that may be the case, it didn’t stop Mark Wahlberg from enjoy a nice glass of red wine at the New England Patriots and Seattle Seahawks game on Sunday.

"I woulda scored on that play." – Mark Wahlberg, on every play pic.twitter.com/Wd8nehlSt7

Would Wahlberg have scored on that play? DOES IT MATTER HE IS DRINKING WINE AT A FOOTBALL GAME.

Look Marky Mark can drink whatever he wants whenever and wherever, but it’s a little surprising to see the Boston native drink wine at a football game.

Also, just in case someone tries to question whether that’s Wahlberg’s glass or not, the wine is most likely Mark’s. How do we know that? The little boy to Mark’s left (the only other person semi-close to the wine) is probably one of his sons. Mark’s two sons are 8 and 10, which puts them a bit short legal drinking age.

Shortly after NBC showed Wahlberg and his glass of grape juice, Twitter weighed in.

Looks like Mark Wahlberg is enjoying the game. pic.twitter.com/kDrcVPKf2o

Mark Wahlberg ordered a bottle of wine from the booth. Amazing. pic.twitter.com/WuxAEOpUoT

Mark Wahlberg, sitting in a luxury box, drinking a bottle of wine. Life is good, but who drinks wine during an NFL game?

1. Soup: It’s often cold at football games late in the season, which would make soup ideal to drink while freezing your butt off during a Packers vs. Bears game in Green Bay. However, soup also requires you to probably sit and focus on eating instead of the game. As a result, save soup for the tailgates.

2. Sushi: Do we need to explain this one? Sushi is probably served in most luxury suites and club sections at NFL stadiums where people probably aren’t watching the game itself. Also, sushi at a Browns vs. Bills games sounds absolutely miserable.

1. Milk: Save it for the players needing to bulk up and your son or daughter’s first game when he or she is barely able to walk.

2. Tea: Look, I love tea, but that’s just the wrong thing to drink at an NFL game. Why? Well let’s see, coffee actually gets you awake and caffeinated and does the same in terms of keep you warm.

3. Wine: Re-read this article from the beginning.