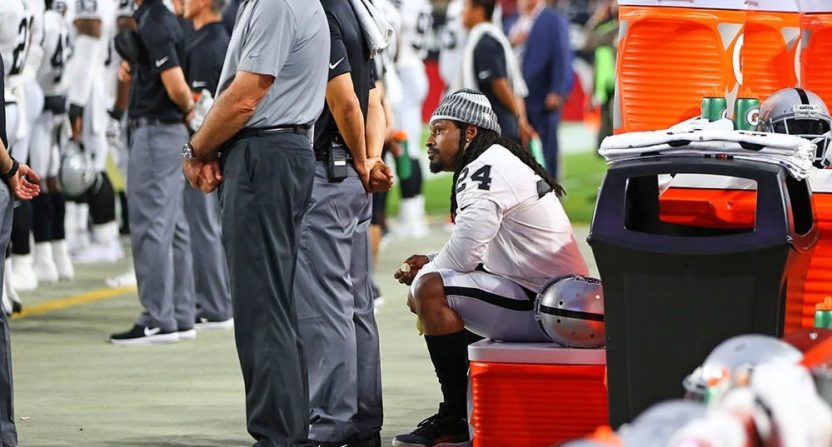 In a story that surely won’t be all over the place very quickly, Marshawn Lynch sat before the Raiders preseason opener on Saturday night.

#Raiders running back Marshawn Lynch sits during the national anthem prior to #NFL game against Cardinals. @usatodaysports @azcentral pic.twitter.com/OAUOfZ39SH

Note the two men standing in front of Lynch, both apparently team employees, likely serving as an attempt to screen the running back from view. That speaks to a predetermined protest on the part of Lynch, who just signed a $9 million, two-year deal to come out of retirement and play for his hometown Raiders.

Marshawn Lynch suited up for the first time as a Raider Saturday night in Oakland’s preseason opener on the road vs. the Cardinals, but did not play.

However, during the national anthem at the University of Phoenix, Lynch sat down on a cooler and held a banana as the rest of his teammates stood up. It appears that two Raiders personnel members stood up in front of Lynch during the song.

Given Saturday’s events in Charlottesville, along with the continued lack of NFL employment for Colin Kaepernick, it’s fair to assume this is a form of protest from Lynch. It’s also fair to assume he’ll elucidate his reasoning in the near future. Whether it’s a one-off or will be an ongoing story, though, remains to be seen.

Surely, though, the reaction from a certain segment of Oakland fans will be measured and reasonab-

Fuck Marshawn too then.. too bad was once one of my fav players and people.

Oh, right. Though in fairness, there are plenty of replies of support, as well:

i totally support this, keep up those peaceful protests.

He's sitting in protest and it's 100% his right to do so. I applaud the Beast.