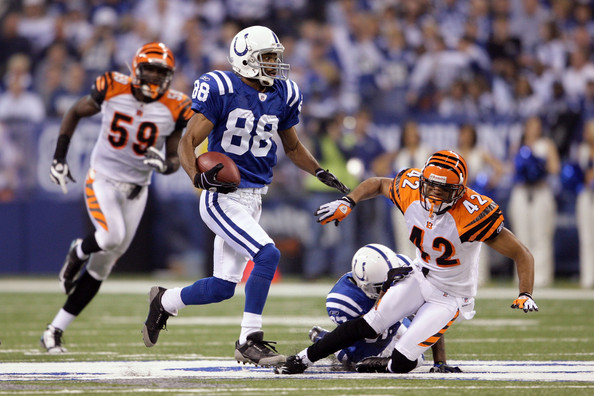 This isn’t baseball… and that’s a good thing. The Pro Football Hall of Fame has looked beyond the troubled histories of two men.

Indianapolis Colts receiver Marvin Harrison and San Francisco 49ers owner Eddie DeBartolo were elected into the exclusive club on Saturday, showing that grave questions of behavior and conduct are not seen as central to Hall of Fame inclusion. The votes set an example which stands in marked comparison to the Baseball Hall of Fame, which has kept Barry Bonds, Roger Clemens, and Pete Rose (among others) outside its gates.

It’s easy to say that the NFL — a league constantly immersed in one ugly controversy after another — should have nothing to do with figures such as Harrison and DeBartolo. In actuality, the decision to let the two individuals into Canton, Ohio, says something honest (if not refreshing) about the reality of excellence in sports.

It is as simple a concept as can be: A person’s excellence in a given line of work has nothing to do with that person’s moral or ethical compass. One can make the distinction between a “job” and a “vocation” or ministry, but the larger point should remain clear: Professional or technical quality has no inherent relationship to strength of character or depth of integrity.

Great artists can be and have been jerks. Terrible sports coaches can be and have been salt-of-the-earth people. Yes, sometimes the best athletes and coaches are equally impressive as human beings, but the essential takeaway is that one can’t draw a straight line between trophies and good deeds, between victories and personal virtues.

The publicity generated by a career in the NFL spotlight enables athletes, coaches, and even owners to soak up large quantities of praise and public affection. Yet, the reality of ever-present adoration in no way makes the loudness of those cheers more important or permanent than the darkest personal moments or the most profound moral failings of these public figures. They might have been better at catching a football or running an NFL franchise than the rest of us, but in their personal dealings, who knows what they did… or might have done?

Professional performance and personal morality are two entirely different things. Excellence in one realm doesn’t carry over to the other. The two dimensions of a life deserve to be examined and evaluated on their own terms.

This is why it’s a good thing that Marvin Harrison and Eddie DeBartolo will be enshrined in Canton later this year. The Baseball Hall of Fame could take the hint.

You might be fully aware of the stories of Marvin Harrison and Eddie DeBartolo, and of the black clouds which followed them to this weekend. If not, here are some refresher courses — two on Harrison (here and here), then one on “Eddie D.”

Yes, it’s true that DeBartolo — at 69, with this year’s Super Bowl being hosted by the team he turned into a dynasty — is reveling in the occasion. Yet, even for the former San Francisco 49er patriarch, there’s an all-too-real awareness that this long-sought day is less than it could and should be.

Personal failings have gotten in the way.

If DeBartolo had not been indicted for failing to report an extortion attempt on the part of former Louisiana Governor Edwin Edwards, perhaps his candidacy would not have remained in question this long. DeBartolo — the only NFL owner to preside over five Super Bowl wins (Art Rooney lived to see only four with the Pittsburgh Steelers) — is a slam-dunk Hall of Famer on the raw merits. The questions surrounding his Hall of Fame fate had nothing to do with how well he operated the San Francisco 49ers in the 1980s and the first half of the 1990s. A lack of comfort with other dealings clouded the issue.

By ushering DeBartolo into the Pro Football Hall, voters have spoken clearly: Whatever reservations one might have about a person’s conduct, a great owner — the best of the best — should be recognized as such. More precisely, would misdeed on DeBartolo’s part change the fact that he won five Super Bowls by establishing an unmatched organizational culture and treating players the way they deserved to be treated? The answer — as is almost always the case in these “excellence-versus-morality” situations — is no.

The only time when an “excellence-versus-morality” discussion can reasonably lead voters to rule against a Hall of Fame candidacy is when the misdeed in question occurs at a point in time before the candidate has secured HOF-worthy credentials.

Let’s take this example beyond Eddie D., both inside and beyond the NFL:

If Barry Bonds had used steroids in the late 1980s, that would affect his HOF candidacy, because he had not compiled a Hall of Fame career at that point. In the early 2000s with the San Francisco Giants, Bonds was already a Hall of Famer due to what had come before in Pittsburgh and the Bay Area.

Pete Rose — as vile as it is that he bet on baseball — was already a Hall of Famer in terms of his accomplishments when he was first found to have bet on games. A secondary point is that gambling is as much an addiction as it is a moral failing (if not more so), but even if you contest that idea (which is reasonable), Rose had already compiled HOF-level stats when he went down his dark path. If Rose had bet on baseball games in the spring of 1975, before the Cincinnati Reds won two straight World Series, yeah, it would become a lot easier to lock Rose out of Cooperstown, New York.

This brings us to Marvin Harrison, who — though not charged with the murder of Dwight Dixon — remains the much more severe example of a wayward public figure, compared to DeBartolo.

As horrifying as it is to contemplate the mere possibility that Marvin Harrison might have killed someone (we don’t know), that episode began in 2008, the receiver’s last year in the NFL. No matter how severe an act of wrongdoing is involved (whether suspected or proven or something in between), Harrison had already compiled stats and achievements worthy of a Hall of Fame receiver. Would any act — proven or not — change the reality that Harrison was an extraordinarily great professional receiver?

"He hid in plain sight for 13 years, an enigma to coaches, teammates." @zkeefer on HOF candidate Marvin Harrison: https://t.co/634x6PAQzK

Halls of Fame are not shrines of morality and ethics. The NFL has a boatload of public-relations problems to deal with, but they often flow from the tendency to cut athletes breaks because they’re immensely popular. It’s precisely that inclination — being sympathetic and/or lenient to athletes because of their excellence on the field, not in spite of it — which perpetuates a culture of ignorance, injustice and repression.

If athletes need to be sent to jail, so be it — even if they’re Hall of Famers on the merits.

If athletes or owners need to be selected into the Hall of Fame, so be it — even if they’re in jail for previous misdeeds.

The Pro Football Hall of Fame recognized these distinctions on Saturday, selecting Marvin Harrison and Eddie DeBartolo in spite of their previous encounters with the law.

Yo, Baseball Hall of Fame: Do you see how easy this is?