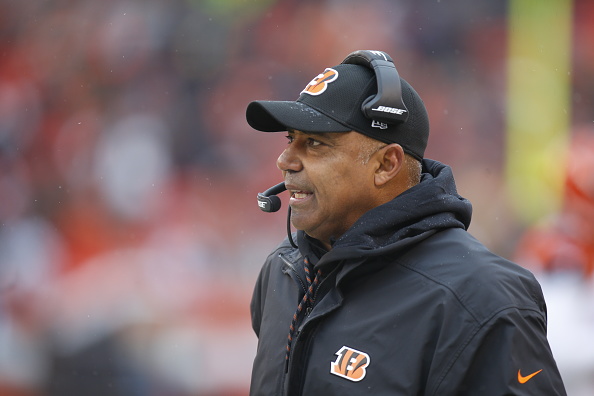 The Cincinnati Bengals entered their Week 15 matchup vs the Pittsburgh Steelers with revenge in mind as a last-ditch attempt at a consolation to their failed 2016 season. The home leg of their season series against the Steelers — after their controversial game in the playoffs last year — was also a chance for head coach Marvin Lewis to take himself off the hot seat in the midst of a woeful 5-7-1 season prior to Sunday’s game.

With five straight Wild Card game losses and a losing season for the first time since 2011 in the cards for the Bengals, Lewis arguably needed a win over the Steelers to save his job on Sunday. To get swept by the Steelers after their crushing defeat to their AFC North rivals in January would be the most bitter end to an era where the Bengals threw away their window of opportunity with Lewis at the helm for each early postseason exit. However, a win and revenge over the Steelers would offer some level of hope for the future for a Bengals roster that was a shell of the former versions of past years for the vast majority of the season.

At halftime, it appeared that the Bengals would get the win to salvage their lost season with no playoffs thanks to a 20-9 lead over the Steelers. Unfortunately for the Bengals and their head coach’s job security, that two-score lead was erased by the Steelers in a half where quarterback Andy Dalton and the offense were shut out by the Pittsburgh defense to lose 24-20 at home. Ben Roethlisberger once again left Cincinnati with the last laugh in a result that is all too familiar for the Bengals, who are 2-14 against the Steelers in Lewis’ tenure with the franchise.

Lewis and the Bengals getting handed a third straight loss to the Steelers in a calendar year, is yet another item in the case against the longtime sideline boss, in a year where everything has turned sour on his once consistent machine that had made five consecutive postseason appearances. The loss of Hue Jackson as the offensive coordinator has caused the regression of Andy Dalton and the offense, while the departure of safety Reggie Nelson hasn’t helped an aging defense that has lost a step. All of this regression under Lewis’ watch further entrenches the doubt in his ability to ever guide the Bengals to a Super Bowl level after his noted failures to win in the playoffs throughout his 14-year run in Cincinnati.

After this nightmare season, it’s time for the Bengals to move on from Lewis and press the reset button on a once prosperous era that now evokes nothing but memories of failed promise. If the Bengals are to quickly rebuild themselves back into a team that can challenge the Steelers in the division, it might just have to be without a head coach who has never been able to find a way to overpass his biggest obstacle.

* The New York Giants are a banged up team, but they continue to find ways to win under first-year head coach Ben McAdoo. After their season sweep of the Dallas Cowboys on Sunday Night Football last week, the Giants continued to build momentum for the playoffs this afternoon with an impressive home win over the NFC North-leading Detroit Lions.

New York lost yet another key player when Paul Perkins left the game with a troubling injury for their ground attack, but their defense was the postgame story after yet another stout performance against a division leader with a shutdown outing against MVP candidate Matt Stafford. The Lions offense was held to six points behind the continued elite cornerback play from Janoris Jenkins and Dominique Rodgers-Cromartie, who have made up for the loss of Jason Pierre-Paul after he underwent surgery for a sports hernia injury and could have derailed the Giants’ season in his absence.

Instead, the Giants look like the most dangerous team in the NFC at the moment, despite a long list of injuries that should have prevented them from achieving a streak of eight wins in their last ten games, to put them in the driver’s seat for the top Wild Card seed. After back-to-back wins against first-place teams in the Cowboys and Lions, the Giants have their best chance at a Super Bowl since their second win over the New England Patriots in 2012. With a defense that is playing every bit as good as that legendary unit led by Pierre-Paul and the now retired Justin Tuck, this Giants team could be dangerous in January.

* The once laughably weak AFC South is now providing some of the best December drama in the league, thanks to a three-team division race that should go down to the final weekend of the season. Wins from the Tennessee Titans, Houston Texans and Indianapolis Colts in the early window kept the scenario the same heading to Week 16, with the Titans and Texans building towards a Week 17 game for all the marbles on New Year’s Day.

The Texans and Titans both needed fourth quarter comebacks to win, but in entirely different scenarios and against vastly contrasting opponents. Houston needed a late touchdown from Lamar Miller to avoid what would have been a catastrophic upset loss at home to the hapless Jacksonville Jaguars, while the Tennessee stunned the red-hot Kansas City Chiefs with a last second field goal at Arrowhead in fourth quarter drama that ended with the two teams at 8-6 on the year.

The Titans look like the team that would be the most dangerous in the playoffs after back-to-back wins over the Broncos and the Chiefs, but the Texans and Colts have also earned the respect of the league this season with wins over top teams. It might still be fun to laugh at the AFC South from time to time, but it needs to be a thing of the past to poke fun at a division that is now beating contenders in the midst of an enthralling race for first place.

* Rapid fire thoughts on the rest of the early games:

Green Bay 30 Chicago 27: Aaron Rodgers kept the Packers from disaster in a wild game in the extremely frigid conditions at Soldier Field. The Bears being terrible this season will prevent this back and forth second half from a place in the annals of classic Packers-Bears regular season games, but it will be remembered in Wisconsin for a long time if the narrow win in the bitter cold is the difference between the Wild Card or their first season without the playoffs since 2008.

Baltimore Ravens 27 Philadelphia Eagles 26: The expected result came out of this game with the struggling Eagles handing the Ravens a needed home win to stay in the AFC Wild Card chase. However, the ninth loss on the season for the Eagles did come with an improved performance from rookie quarterback Carson Wentz against the Ravens’ defense on the road. At this point, all that should matter for the Eagles is the progression of Wentz into the end of his rookie season, and a strong day where he kept his team in a road game against a team that is still in the playoff hunt is a good step for the second overall pick.

Buffalo Bills 33 Cleveland Browns 13: There is not much to be said on a game that will have little impact on the landscape of this season, other than the Browns’ potential march towards 0-16. The Bills picked up the convincing win over the tanking Browns to move back to .500, but it will feel hollow without any hope of the playoffs. Beating the Browns will also do nothing to save Rex Ryan’s job, so this is a win that will provide very little context on the future in Buffalo compared to the final two weeks of the season. If Ryan wants to keep his job, he will need to do so with wins over the Dolphins and the Jets to end the season.