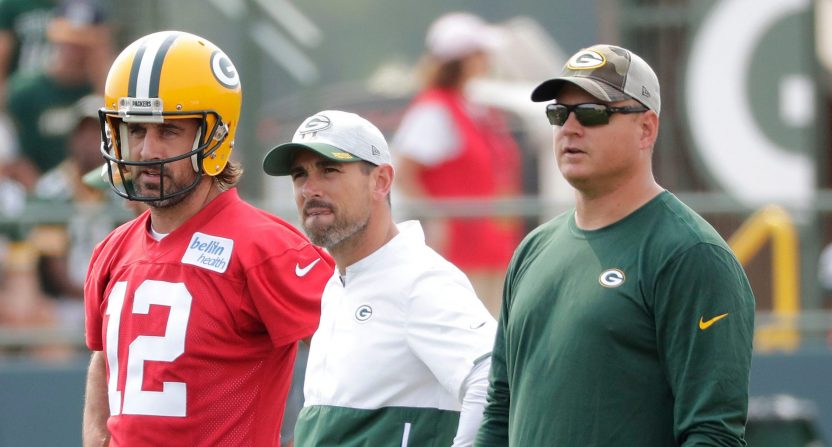 Ever since it came out that he had tested positive for COVID-19 and would have to remain in quarantine for 10 days as an unvaccinated player, everyone has been wondering whether or not Aaron Rodgers would play for the Green Bay Packers this Sunday.

Rodgers had a busy week, going on The Pat McAfee Show on Friday for a wild interview in which he explained why he isn’t vaccinated. He went back on the show on Tuesday to try to smooth things over and back away from the controversy. Meanwhile, Packers head coach Matt LaFleur deflected Rodgers’ comments as much as he could.

On Thursday, LaFleur was asked about whether or not he’s been in touch with Rodgers about the upcoming games. He said that not only had they been in touch but the communication had been “going great” virtually.

Matt LaFleur said “it’s been going great” getting Aaron Rodgers ready virtually and is confident in him for Sunday vs. Seattle “provided he checks out well.”

When asked if he won’t know until Saturday whether Rodgers indeed checks out well, LaFleur said: “Pretty much.” pic.twitter.com/6HAyzFQuve

“It’s been going great. The communication’s been there,” LaFleur said, via ProFootballTalk. “He’s been in every meeting. He’s been engaged. So, it’s just he’s not with his guys out on the field. That’s the dynamic that you never know. But we’re very fortunate to have a guy that has got a ton of reps under his belt, has played a lot of ball. So we’re pretty confident that provided he checks out well, that he can go out there and play at a high level.”

LaFleur couldn’t say for sure that Rodgers will be ready to play against the Seattle Seahawks, but he added that the team will be planning as if he isn’t just in case.

“Definitely it adds an element of just unknown there, right? But Jordan [Love is] preparing like he’s the starter and we’ll get them both ready to play,” LaFleur said.

Rodgers noted in his Tuesday interview that there is a “small possibility” he will be unable to play based on the medical check he received when he returns.