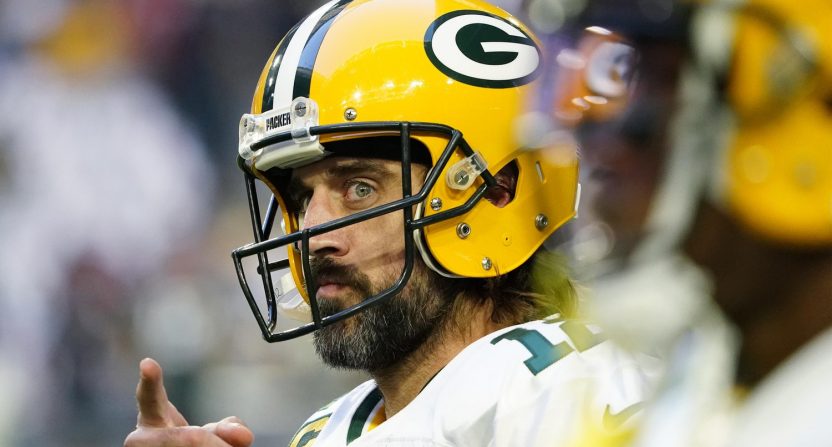 Aaron Rodgers returned to action last week following his time in quarantine after testing positive for COVID-19.  He threw for 292 yards, no touchdowns, and one interception in Green Bay’s 17-0 win over the Seattle Seahawks. It wasn’t his best performance but it helped move the Packers to 8-2 as they fight for a bye in the playoffs.

However, Rodgers’ status for this Sunday has been in doubt as he missed practice on Wednesday and Thursday while dealing with a toe injury. Wednesday, Rodgers told reporters “I’m definitely playing Sunday” but everyone was still waiting on word from head coach Matt LaFleur to know for sure.

“Obviously, the body is really looking forward to that, as is my toe,” Rodgers said on Wednesday, via ESPN. “But we’ve got two games until then. It’s kind of a day-to-day how I’m feeling, whether or not I’m going to practice, but I didn’t find any issues with recovery, standard Monday and Tuesday, as I’ve done throughout the season. So I feel good wind-wise.”

LaFleur spoke with reporters on Friday and was asked about whether or not Rodgers is set to play. His answer was blunt and to the point. “He will go.”

Packers coach Matt LaFleur left no doubt about Aaron Rodgers' status for Sunday: "He will go."

Before that, LaFleur said Rodgers (toe) was "limited today (and) looked good throwing the football."

And, in fact, Rodgers practiced on Friday, the first time he’d done so all week.

Aaron Rodgers is practicing for the first time this week. It’s actually his first real practice since Oct. 22. He had been a spectator the last two days because of his toe injury. pic.twitter.com/RaE7MNr6CI

The Packers have two games before their bye so they’re going to push through and hope that Rodgers doesn’t injure himself further. It’s not ideal but Green Bay has to do whatever it takes to keep pace with the Arizona Cardinals, who are also 8-2, while the Los Angeles Rams (7-3), Dallas Cowboys (7-2), and Tampa Bay Buccaneers (6-3) are all lurking.

The Packers visit the Minnesota Vikings on Sunday for a critical NFC North showdown.