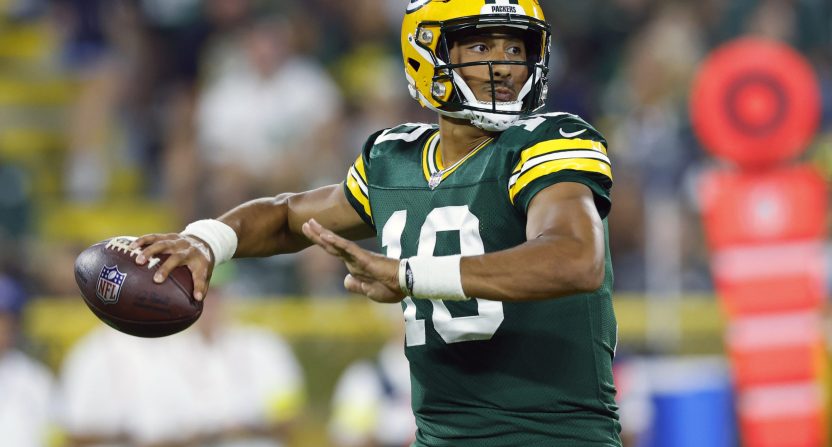 There’s no real question or debate that Aaron Rodgers is the starting quarterback for the Green Bay Packers this season, but that isn’t stopping Packers head coach Matt LaFleur from dishing out some heavy praise on second-year quarterback Jordan Love.

When Green Bay took on the New Orleans Saints in a preseason matchup on Friday, Love played almost the entire for the Packers. Love’s numbers weren’t all that eye-popping. He finished with 12-for-24 for 113 yards, one touchdown, no interceptions and one sack.

Still, LaFleur was quite impressed after the game, saying that Love is “light years ahead” of where he was last year at this time, according to Pro Football Talk.

“I know the numbers don’t necessarily reflect probably how I feel,” LaFleur said. “He stood in the pocket and was throwing on rhythm. Unfortunately again we had too many drops. He was decisive. I think that’s the big thing from him. I see a much more decisive player out there. I think that’s going to lead to a much more effective player.”

Rodgers will undoubtedly start every game he’s able to this season, but if something goes wrong it sure sounds like the Packers like their depth at the quarterback position. That’s always a good sign for a team with a veteran quarterback nearing retirement and a young quarterback still developing behind him.